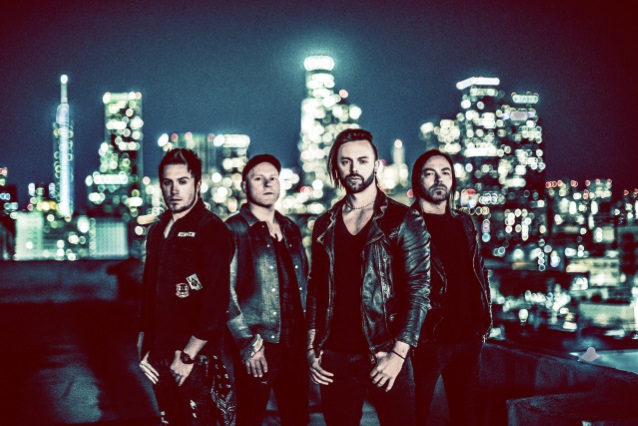 Sophie K of Scuzz TV recently conducted an interview with frontman Matt Tuck and drummer Jason Bowld of Welsh metallers BULLET FOR MY VALENTINE. You can watch the entire chat below. A few excerpts follow (transcribed by BLABBERMOUTH.NET).

On BULLET FOR MY VALENTINE's new album, "Gravity":

Jason: "It's amazing, basically. [Laughs] It's got the most heavy moments of any BULLET album, the lightest moments, with some interesting angles with electronic sounds. It's a good journey from start to finish."

Matt: "It's the most interesting album we've ever written in many ways. It sounds sonically different from anything we've done in the past. The way we've written the songs and executed them on the production side is very new and contemporary and different for us, but that's made it a very interesting, stand-out record."

On the reaction to BULLET FOR MY VALENTINE including electronic elements on "Gravity":

Matt: "It wasn't more people's reactions, it was more about not losing the identity of the band and trying to incorporate new things we haven't done before. To kind of get a new style of writing and try not to rely on the band's formula and sound from the past was a little bit difficult for some people to get onboard with. It just required a lot of writing, a lot of being creative, letting our barriers down, creativity, musically, just having some fun with it and trying to discover something new. After about two or three months, it all started to come together quite nice."

On how electronic music was unfamiliar terrain for the band:

Matt: "We were kind of venturing into new territories for sure, but that's kind of what made it fun. It was interesting. It was like discovering a new way of writing and recording music. We know what we can do as individuals with our instruments. Now we can get creative and write great songs with just that, but it was more about expanding our creative and musical horizons and just getting a bit weird."

Matt: "It's just there to enhance what was already there. It just adds a bit of a movie soundtrack-feel to a lot of the songs. It gives it a different feel and a different vibe and that kind of side of it. This album has massive dynamics and it's got massive shades of color, light and dark. It takes you all over the place emotionally. It's an album, if you listen to it in its entirety, if you want to understand what's going on and how we've done it, it's an interesting record. Like you said, we won't use the word 'extreme,' but it's a very different sound, but the sound has a massive evolution as it goes along. The dynamics of the songs start from something so beautiful and tender and soft and ends all big and anthemic and gnarly, as a BULLET song should. It's just trying to incorporate new stuff, but ultimately write great songs. That was the focus, to write awesome songs and not worry about his capabilities as a drummer, not worry about Padge's [Michael Paget] abilities as a lead player. It was stripping all that back and not relying on any of that. It was about songwriting."

On the "vulnerable" nature of Tuck's lyrics on "Gravity":

Matt: "It was more just using my outlet for music and songwriting as a way to kind of deal with stuff that was going on in my life and my head. It was my way of coping with it and it was my way of discovering a new way of writing a song and trying to make it as heartfelt and real and honest as possible. It shows a far more vulnerable side to me that I've never shown. But I think it has led to great songwriting. I've been a bit through the mill behind the scenes with certain things and I've just used my artform to let it all hang out. It wasn't an easy decision because it does show massive vulnerabilities of my emotional side. But it has led to a great record and I think people are going to connect to in a way they've never connected to a BULLET record because of it."

On how the lyrics on "Gravity" could help shine a light on men's mental health:

Matt: "It's something that I have been through a little bit and have experience with now and it's not something I ever thought I would. I never had experienced anything which I thought was a mental issue at all until the last couple of years. I got myself in a right pickle. I didn't really see any future for me and the band. I didn't want to write music anymore, I didn't want to do anything. I think addressing the issues head-on was my way of dealing with it. Again, it was a struggle. I didn't want to, but when I chose to do that and made the decision to write about it, it actually became a bit of an outlet for it all. Actually, I can look back on it now and turn it into a really positive thing, which is good."

On whether "Gravity" signals that BULLET FOR MY VALENTINE is ready to become one of the biggest rock bands in the world:

Matt: "It's always been my goal. Obviously, Jason's new to the BULLET family, officially, but he's been for a long time behind the scenes and on the kit. I think it's the same thing, or what's the point?"

Jason: "You want to get as high as you can. You're cheating the fans, you're cheating everyone if you just hide. You have to strive to be as big as you can. It's our career at the end of the day. We want it to last for as long as possible."

Matt: "We just want to write great songs. It's what we're focused on. Thankfully, we've had a very long and successful career so far, but I think there's a lot better to come and a lot of years ahead of us, still. Should those phone calls come from the promoters for headlining these things, we're definitely more than ready. We've been playing arenas for a long time, we've headlined some festivals anyway. It just seems that we need to be a little bit more patient. I think 'Gravity' is the record that will solidify us as that band."

"Gravity" was issued through BULLET FOR MY VALENTINE's new label home, Search And Destroy, the imprint launched in 2014 by Spinefarm and international artist management company Raw Power Management.

BULLET FOR MY VALENTINE will be joined by WE CAME AS ROMANS and BAD OMENS on this fall's U.S. tour, which runs from September 13 through October 16. The band will also appear at two premiere fall festivals — Riot Fest in September in Chicago and Aftershock in October in Sacramento.

Every ticket purchased online for any of the U.S. dates on the upcoming fall tour will include a copy of "Gravity".

Earlier in the year, BULLET FOR MY VALENTINE completed an extensive American tour with AVENGED SEVENFOLD and BREAKING BENJAMIN.