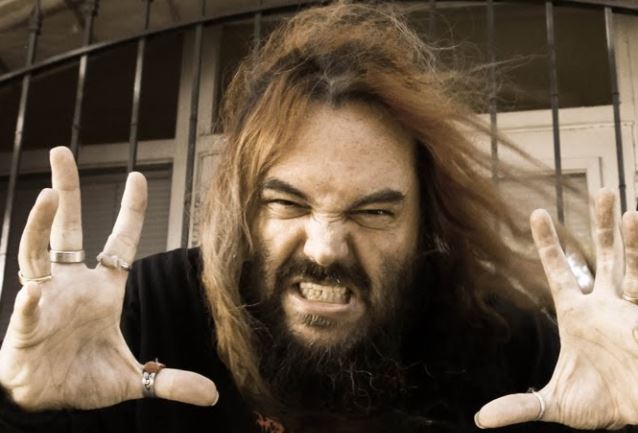 MAX CAVALERA On SEPULTURA: 'I Don't Really Give A F**k About What Those Guys Do'

Live Metal recently conducted an interview with Max Cavalera (SOULFLY, CAVALERA CONSPIRACY, SEPULTURA). A couple of excerpts from the chat follow below.

Live Metal: We're obviously here to talk about the new [SOULFLY] album, "Savages", which is due out Oct. 1, 2013. My first question is, what does "Savages" refer to? Are these savages of the past, present, or our society as a whole?

Max Cavalera: It's pretty much mostly about right now and the state of the world. We claim to be sophisticated, and with the Internet and computers, but we're still decapitating each other, chemical-gassing people — it's just (savagery). I think the human spirit is still very much a savage, so that's why I thought the name would be cool. I think (savages) is a cool word, a simple word, but it works with the album cover, with the big skull. And we love the stuff that's going to go inside with the record. The lyrics — stuff like "Cannibal Holocaust" and "El Comegente", that deals with serial killers and cannibal people. I think all together it really works on the level and the whole savagery idea for the whole record.

Live Metal: Obviously, you have been a part of so many influential and just classic metal records, again, going back to the SEPULTURA days, and even for those guys, too, it almost set the standard for everything you guys have done since. Now is this pressure that you feel going into each and every album trying to live up to the past SEPULTURA and SOULFLY albums, and to fans expectations?

Max Cavalera: A little bit. There's always a little bit of pressure, but I work good with pressure. I think it's motivation. And it's always a challenge making a new record. I just gotta follow my heart really on an album and don't even pay attention about what people are gonna say. You now, a lot of people didn't like "Roots" when it first came out. There was a lot of negative reaction. And now it's a classic record. Now people praise the album. So you let the time do the talking. I think time fixes everything. And to me, the way I feel about records is, if the record's good and powerful, I'm good with it. And that's how I feel about "Roots", and that's how I feel about "Savages". It's a powerful record done from the heart and exactly what I wanted the record to sound like. And 10 years from now, we'll see where that record will be in people's minds. But I think it will remembered great.

Live Metal: What's the status of CAVALERA CONSPIRACY? Are we gonna hear any more of that in the future from you and (your brother) Igor (Cavalera)?

Max Cavalera: Yeah, we're making another record next year — all grindcore. I wanna do a grindcore record with that.

Max Cavalera: Yeah, I think it would be really cool. People haven't heard that from me yet, and I think people will be surprised. I love that kind of stuff — (bands like) WORMROT, NAILS and PULLING TEETH. Just super-heavy with like one-minute songs and kind of old NAPALM DEATH style. I think Igor is going to go for it, man. I think we're going to pull it out. And then we'll really shock the world with that.

Max Cavalera: It's always good to do something new, something exciting. I thought of the grindcore idea when I was going through my music collection, and I thought, "I've never done a grindcore album. OK, well maybe it's time to do one? OK, let's do it with CAVALERA (CONSPIRACY) ... OK, let's do it."

Live Metal: I'm not trying to put you on the spot here or anything, but with the new SEPULTURA album coming out with Ross Robinson as producer, I'm very interested to hear that. He, of course, did the "Roots" album and the first SOULFLY record, so I think I have good expectations for this thing coming out. Are you interested to hear their new album — or have you heard any of it — and what are your thoughts of them getting back together with Ross Robinson?

Max Cavalera: Ross hasn't done anything good in a long time. He had spent the last 10 years without anything except Vanilla Ice or some shit like that, which I was like totally disappointed, you know? It's like, "What is he doing? What the hell is he doing recording with Vanilla Ice, man?" You know, ... that's not cool. I don't know. I don't really care for SEPULTURA. To me, I kind of don't care what they do. It's kind of a hard topic because I created the band and still consider that part of my life. And it's really hard to deal with the fact that they continue with the name without me — without any Cavalera. After my brother left, it was even more hard for me to look at them seriously. There's nobody original in the band. It's like if MEGADETH was playing without Dave Mustaine and Dave Ellefson, it would be like, "Why are they still calling it MEGADETH?" That's how I look at SEPULTURA, and I think a lot of fans share the same opinion. I talk to a lot of fans, and they don't take them seriously either. You know, I don't know, maybe Ross can get something out of them, but nobody else could. But I really don't care what they do. It's not important for me. I got all my life, my work, my projects, and that's what I care about. I've been in SOULFLY now longer than I was in SEPULTURA, and I love SOULFLY and I love what SOULFLY has created. And I'm very busy here, so I don't really give a fuck about what those guys do.