Sticks For Stones conducted an interview with SOULFLY and CAVALERA CONSPIRACY frontman Max Cavalera prior to the short Australian tour where he and brother Igor Cavalera will perform select tracks from SEPULTURA's seminal "Beneath The Remains" and "Arise" albums. You can listen to the entire chat below. A few excerpts follow (transcribed by BLABBERMOUTH.NET).

On the writing process for "Beneath The Remains":

Max: "It was a crazy time, man. At that time in Brazil, we only used to play five shows a year, so it was very slow and we were, like, really hungry — we wanted to do more. We knew we could do more. We knew we could be touring. It was a bit of frustration building inside the band, but we knew if we kept working, things will eventually pick up. I got a contract. I finally got a ticket to New York and dropped off a bunch of records in New York and one [label] was Roadrunner and Monte [Conner] called us back and gave us a contract. We were on cloud nine. Recording for the first time with a real label and with a producer. Scott [Burns, producer] came to Rio and did 'Beneath The Remains'. We worked really hard on 'Beneath The Remains' and I think it shows the maturity of the band. You can tell from 'Beneath The Remains' to 'Arise' that grew, also, again. 'Arise' is a different beast from 'Beneath The Remains'. I think together, these two records, they were made for each other. I think 'Beneath The Remains' and 'Arise', if you listen to them together, it's more fun than separate. That's why I had this idea to do the shows, it was Igor's idea to do both records together. I think it was genius. It was really good. We eliminated some of the fillers that we think wasn't that exciting, stuff like 'Subtraction' and 'Meaningless Movements' — those were fillers. We just played the 'hits.' [Laughs] It's a full, aggressive, brutal, all just metal, late '80s. That era in metal was great. It was what I called the 'golden era of metal.' We had us, you had OBITUARY, you had MORBID ANGEL, DEATH and then in Europe, ENTOMBED, CARCASS, GODFLESH. Fuck, man, it was the exciting era of metal. We rode that high with touring. The 'Arise' tour was great; 15 months that took us around the world, Indonesia, Australia, Russia and it was the beginning of it. So, yeah, I look back with really fond memories of that time and that's why it's so cool to play these records nowadays. It kind of makes us remember some of the good times we had and appreciate the record and I really appreciate being back with Igor and be able to do this with him again. It's even more fun and it sounds even better 30 years later. The record sounds better than they did when they first [came out]. It's like we injected new life into those songs and they're even better live now than they were. It's a really, really fun, exciting thing to be able to do this right now in our career."

On whether it was hard for Cavalera to relearn some of the more technical songs on "Beneath The Remains" and "Arise":

Max: "A little bit, yeah. We took it very seriously and we rehearsed a lot, especially last year. I told Igor I didn't want to do nothing half-assed. If we're going to do this, I want to do it in a way that we play it and I didn't want to see one bad comment on the Internet from anybody and everyone who goes to the show has to be completely blown away. It was a bit of a nightmare to relearn a lot of those riffs. It took a lot of practice, but, also, at the same time, a lot of fun to fall in love with these records again. I don't listen to my own stuff that much. For me, I prefer to listen to other people's music. For me to go back to those records, I had to dissect the album the way we did it. It made me appreciate those records even more. I completely think 'Beneath The Remains' and 'Arise' are very good records. There's some really cool, magical moments, especially some breakdowns and some fast parts, like you said, they're very technical. It's the pinnacle of the death/thrash era and it feels so good to play that live. It's really, really fun."

On whether the songwriting process between he and Igor is collaborative:

Max: "For sure, especially 'Psychosis', which was my favorite CAVALERA CONSPIRACY record we've done since the first one. There was a return to our primal element of Max and Igor, death/thrash element, which is kind of like this 'Beneath The Remains', 'Arise' tour we're doing right now, it's really similar to 'Psychosis' in many forms. The sound of 'Psychosis' is really grounded on this era of Max and Igor. So, for sure, yeah, Igor's great. I love working with him. He's got a lot of great ideas. He helped me with the artwork and just really a blessing to get to work with my brother after all these years. I look forward to doing more records with him. It's always really fun to be around with him. We trade information all the time about bands. I show him stuff that he didn't know; he shows me stuff that I didn't know. It's really cool. We have a really good brotherly [vibe]. It's really fun."

"Psychosis" was released in November of 2017 via Napalm Records. 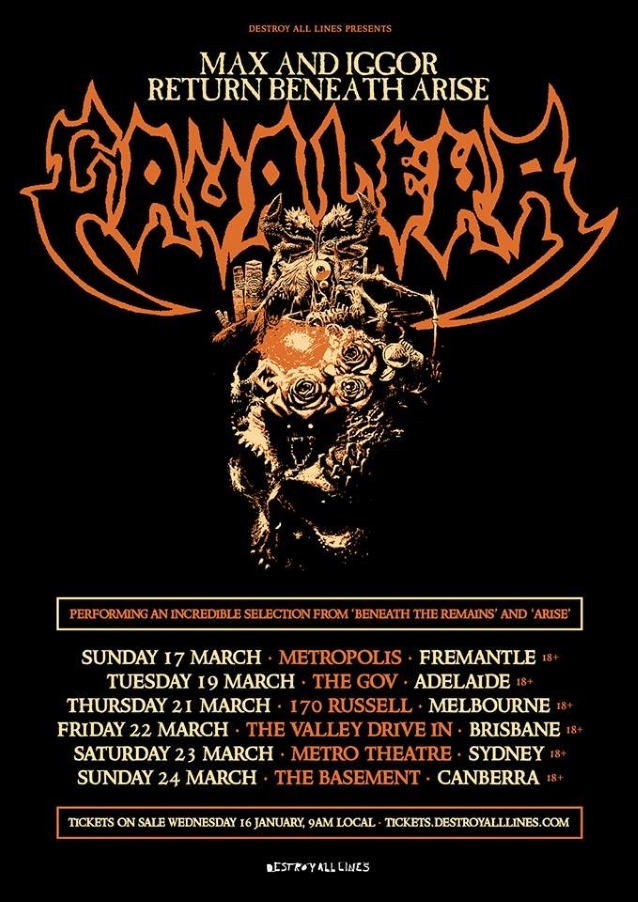