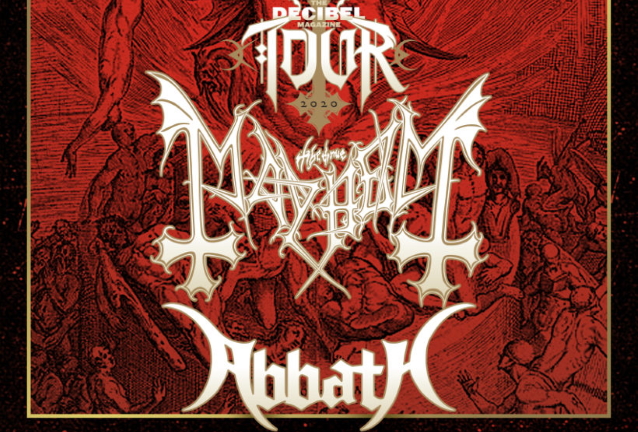 MAYHEM And ABBATH: Seattle And San Francisco Shows On 'Decibel Magazine Tour' Canceled Due To Bans On Large Gatherings

Due to city-wide bans on gatherings in excess of 250 people in Seattle and 1000 people in San Francisco, the "Decibel Magazine Tour" dates in those cities have been canceled.

The Washington state and San Francisco are banning large gatherings to help reduce the spread of the novel coronavirus, according to The Verge. The bans are a way to create social distancing, which may help people avoid coming into contact with others who might be sick. Gatherings of more than 250 people in the Seattle area are prohibited through the end of March. Gatherings of more than 1,000 people will be banned in San Francisco for two weeks.

This year's edition of the "Decibel Magazine Tour" — featuring MAYHEM, ABBATH, GATECREEPER and IDLE HANDS — was scheduled to hit Seattle on March 17 at Showbox Market and San Francisco on March 20 at The Regency Ballroom.