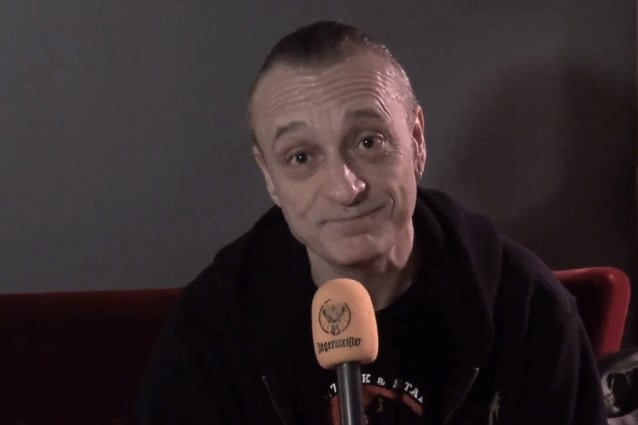 Bassist Jørn "Necrobutcher" Stubberud of Norwegian black metal legends MAYHEM says he felt "sick" watching the murder scene of founding member Øystein "Euronymous" Aarseth in Jonas Åkerlund's film adaption of Michael Moynihan and Didrik Søderlind's 1998 book "Lords Of Chaos: The Bloody Rise Of The Satanic Metal Underground". Necrobutcher recently made headlines when he said he was on his way to kill Euronymous before BURZUM's Varg Vikernes beat him to it. Vikernes would end up serving 15 years in a Norwegian prison for murder.

In a new interview with Finland's Kaaos TV, Necrobutcher explained how MAYHEM came around to the idea of lending its involvement to Åkerlund's film, marking a shift in strategy from its Norwegian black metal contemporaries who either outright declined participation or dismissed the book and film entirely.

"First of all, we were kind of hesitant toward the whole thing," he said (see video below). "You get this prompt call, 'Hey, I'm making a movie out of your band. What do you think about it?' I was like 'Ha? Fuck off!' He [Åkerlund] didn't even bother to ask us anything and they're going to base the film on the book, which is complete nonsense. Then I got worried — not worried that I was being slandered, but worried that someone would falsify the story and make money on it as well. Then I saw they had even had printed pictures of [deceased MAYHEM vocalist] Dead [Per Yngve Ohlin] in the book, I tried to sue the whole fucking book, too. With that in mind, I just told everybody 'Fuck off!' when this project came along. Then there were forces trying to get me and Åkerlund to meet. I was in L.A. two times without meeting him. He was there but I was doing accounting for the tour and stuff, so I didn't have time. But I was another tour, so it turns the guy is a good guy. We started to talk about several things and I said to him that 'Okay, you want something to make this film more authentic and you need some photos, maybe some music and shit like that? I must see the pre-movie first before I can okay anything. I met you a couple of times, but I don't trust people. I'm a paranoid guy.'"

He continued: "But when I saw the trailer or the pre-movie, I was thinking to myself and what I had in mind that the producer had said, 'This movie is coming out anyway.' The parts where they needed a little bit of music, they would just come up with something similar. And so it wouldn't change anything except a little bit of quality in the movie. And then I was thinking to myself, 'These people are good people. They come up to me now. They send me the preview. If we just give them a little bit, then that would make the movie a little bit more quality-worthy, then why not? And we'll get a little check on the side for the help.' Then the movie came out and first of all, all the journalists in the world, they didn't use L.A. [Times], but CNN, BBC, ABC, NRK, SVT, DR, everybody, RT, everybody wanted me to have a comment. I told them all, 'I'd gladly comment on this movie after it comes out because I want people to make up their own mind about this movie.'

"First of all, I don't think anything about movies. I like movies, but I don't know anything about making movies, so I don't know what's really good quality and what's not, and not keeping up to date with the new technology or anything. Of course, I was curious about the actors that were going to play us, to see if they had used some time and had effort into the characters. The first thing that hits me is that they actually, where they did a good job on the wardrobe, and everything around is made so back in time, back to 1990, because it's all the posters in the world in the Helvete [record] shop and all the t-shirts we're wearing all the patches and everything, it's spot-on. It's the same. That gave me a little shock. They had taken a lot of these historical things that we all know from court papers, from newspapers, from interviews, like, for example, when Vikernes drove in his mother's Volkswagen over the mountain and the story was that he was driving while under a blanket in the backseat [to murder Euronymous]. Some of these details, he put forward in the movie."

Necrobutcher was then asked whether the scenes depicting MAYHEM vocalist Per "Dead" Yngve Ohlin's suicide and Euronymous's stabbing death made him feel "emotional." Necrobutcher had previously expressed dismay over the fact Euronymous took photos of the aftermath of Dead's suicide, who reportedly made necklaces out of the fragments of his skull.

"Yeah. I dreaded it," he said. "It wasn't a good thing to be [watching]. Before I saw, Jonas had told me he studied autopsy reports on both killings and he had reconstructed the killings stab by stab because you can read from the autopsy where the first stab was in. When knowing that and when I saw that, and it was a slowed-down scene, it was really quick, they drove out both scenes, they were drawn out a little bit, it made me sick to watch. I felt sick to my stomach when I watched that. Afterward, I felt completely empty inside and really down and, like, 'Fuck…' It really hit me, actually. I didn't want to talk to anybody the rest of that day, that's for sure."