MEGADETH bassist David Ellefson, who recently became a Lutheran pastor, will give a lecture on Martin Luther and the theology of heavy metal lyrics today (Friday, March 17) at 4 p.m. at the Tegler of Concordia University of Edmonton in Edmonton, Alberta, Canada. Says Ellefson: "The similarities are remarkable and fun for all!"

The event is sponsored by the Canadian Centre For Scholarship And The Christian Faith, along with FaithLife Financial, as a part of the Reformation 500 celebrations.

David has studied at Concordia Lutheran Seminary in St. Louis and is the founder of MEGA Life ministries, a satellite of Shepherd Of The Desert Church (LCMS) in Scottsdale, Arizona.

David is in a unique position to discuss Luther's view of music and its relationship with secular art. Dr. Bill Anderson, director of Canadian Centre For Scholarship And The Christian Faith, says that "Ellefson will no doubt entertain and educate at this very exciting event." Enjoy a mix of theology, song and stories. The lecture is free and open to the public with reception to follow.

In a 2012 interview with Great Falls Tribute, Ellefson talked about how he and MEGADETH mainman Dave Mustaine renewed their interest in Christianity. "It's pretty funny, isn't it? When you fight [God], you have struggles and it's an uphill battle. When you surrender to it and you embrace it, that becomes like a jet engine that rockets you forward with not just great success but ease," he said. "All of a sudden, you're not operating from a place of always being so competitive and fear-based. You start to go downstream instead of always paddling upstream."

"The only reason we talk about [our faith] is because people ask us about it. The MEGADETH tour isn't some crusade. We're not on some mission." 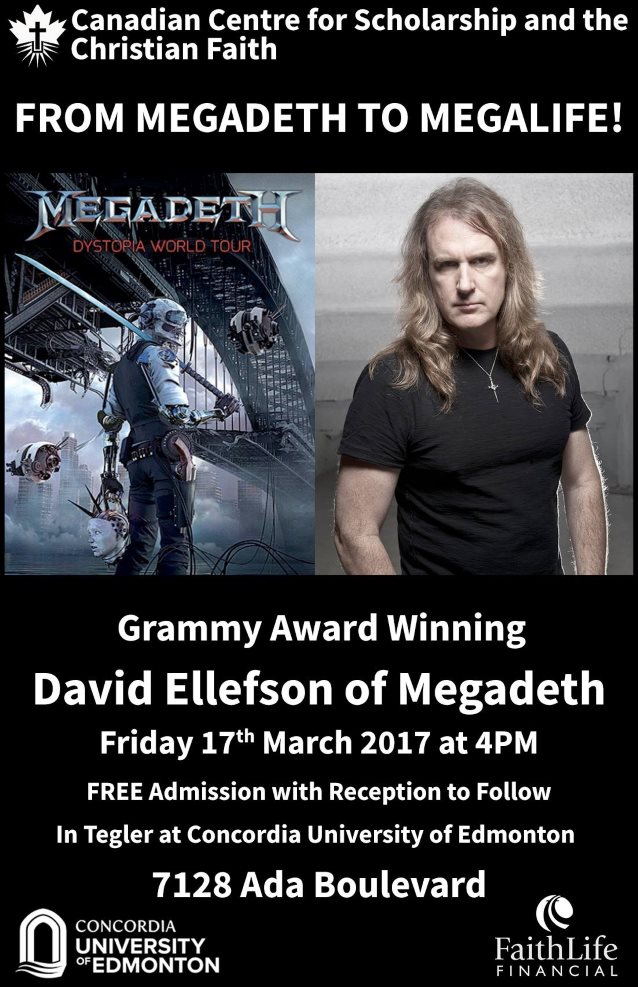