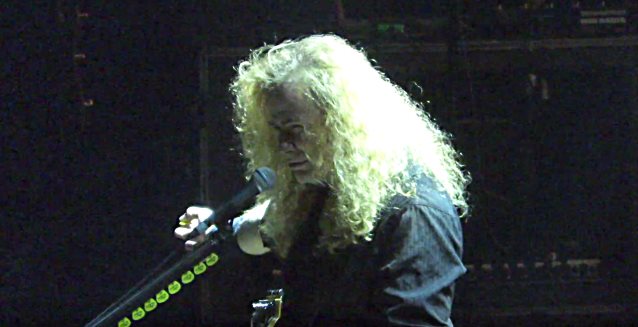 MEGADETH mainman Dave Mustaine has called out a fan for "rudely interrupting" him during the band's concert in Moline, Illinois last week.

Mustaine was introducing the song "Holy Wars…The Punishment Due" at the October 7 show at the iWireless Center when he stopped mid-sentence after hearing a fan shouting something at him. "What? What'd you say?" Mustaine can be heard saying in a video clip of the exchange (see below). He briefly paused before continuing: "Okay, everybody, I'm gonna wait 'till this asshole is done talking." He paused again, and added: "No, go ahead. Whatever you've gotta say is more important than what I've gotta say. Go ahead. No, don't act like a kiss-ass now. Talk or shut the fuck up."

Clearly frustrated over being cut off, Mustaine said, "What a turd," and continued his "Holy Wars" introduction, telling the crowd: "Okay, so, like I was saying before I was so rudely interrupted by this pile of shit…"