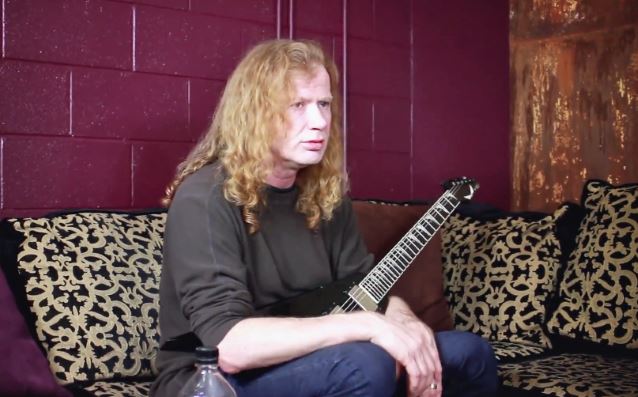 Guitar Interactive magazine conducted an interview with MEGADETH mainman Dave Mustaine at the end of February in Los Angeles, California. You can now watch the chat in two parts:

On whether playing with various guitar players in MEGADETH over the years brings out something different in his own playing:

Mustaine: "There's not really that much of a difference when you're playng with guitar players. There is something that's of a personal nature. And I feel that the couple of months I've been with [current MEGADETH guitarist] Kiko [Loureiro], we have become very close friends. And there was a weirdness with [former MEGADETH guitarist] Marty [Friedman] that — and [MEGADETH bassist] David Ellefson will concur — we could not cross that barrier, that he would just not let people in. [Former MEGADETH guitarist Chris] Poland and I had a very turbulent time, and [former MEGADETH guitarist] Jeff Young I never really got that close to either. With Kiko, we have so much fun goofing around and doing silly stuff all the time. And I think that's important, because when you leave home and you're gone for this long, and you're with a guy that you barely know, it can be really bad."

On whether he is still having fun playing in MEGADETH after all these years:

Mustaine: "Absolutely. It's really fun for us, because we make people happy, and I think that's probably the most important thing right now, especially in these days that we're living in right now with no real certainty where our nation is going. And you see the way that the music industry has been changed a lot with all the technology. There's a lot of people that are out on the road playing that are not developed yet. And these guys, I feel sorry for them. They go out on the road and they try it and they end up quitting. And you never know how many wonderfully talented musicians you're never gonna get to hear because they just give up."

MEGADETH will announce the details of its upcoming North American headlining tour this week. Joining MEGADETH on the five-week trek, which is expected to take place this fall, will be AMON AMARTH, along with METAL CHURCH, HAVOK and an as-yet-undisclosed fifth act.