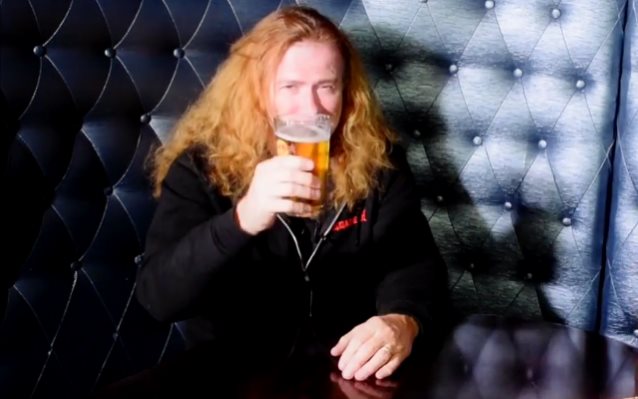 MEGADETH's DAVE MUSTAINE: What I Look For In A Good Beer

Dave Mustaine was recently interviewed by Kilpop.com about À Tout Le Monde, a new beer from Unibroue born of the friendship between its brewmaster Jerry Vietz and the MEGADETH mainman. Named À Tout Le Monde as a nod to one of the band's songs and one of their biggest hits in Quebec, this beer recalls the consonance of Unibroue's flagship beer, La Fin du Monde.

Asked when the first time was that he had a beer, Mustaine said: "The first time I had a beer, I was really little — really, really little. Actually, my mom and dad got divorced when I was 4, so I was with my mom. And we lived in Huntington Beach and she worked many cities away, so she would commute from where she worked back to the house, and I came home from school and she would have beer in the fridge. But we were super poor, so it was those beer cans that were white and had the blue letters on it that said 'beer.' The only other beer I can remember at that period was Meister Brau, which was really another awful beer. So it was generic beer and Meister Brau back then, 'cause, like I said, we were really poor. And being of German heritage, beer is kind of like running water for me anyway."

Regarding what he looks for in a good beer, Mustaine said: "Well, I'm kind of spoiled now with our beer, because we use the yeast only one time. Most beer makers, they'll reuse the yeast over and over again. And most batches will be anywhere from the first one to seven batches that they'll use that same yeast. And for us, it's very high quality, it's very crisp. We make sure that the date that when it's finished distilling to when it's packaged to when it's put into the marketplace, there's a timeline for that. Nothing is rushed. It's not about getting it out there and making mass production of this liquid. It's about making sure that… See, it's like art to Jerry. Jerry Vietz's the beer meister. So there's a lot of ties there. And when Jerry had said, 'I think we should call it À Tout Le Monde,' I was, like, 'Great. Whatever you call it, I just like how it tastes.'"