MEGADETH is in the final stages of the songwriting process for the band's new album, which is tentatively expected sometime next year via Roadrunner Records. The CD is once again being helmed by acclaimed British producer Andy "Undie" Sneap, who produced MEGADETH's last album, "United Abominations" (May 2007, Roadrunner Records).

MEGADETH's forthcoming LP will be the group's first with guitarist Chris Broderick, who replaced Glen Drover at the end of last year.

MEGADETH drummer Shawn Drover has issued the following update via the "Forums" section of the band's official web site:

"I will be at the NAMM (National Association Of Music Merchants) show [on January 15-18 at the Anaheim Convention Center in Anaheim, California], which is always fun for me. It's a good chance to see a bunch of friends, vendors, endorsers that I haven't seen since... well... the last NAMM show.

"This year's show will be a bit more exciting for me, as my new Ddrum Shawn Drover signature snare drum will be on display. I have yet to see the finished product myself, so I will be looking at it pretty much the same time as those who express interest will. As well, my 2009-2010 Ddrum kit will be on display and again I have not seen this kit yet, either. My Ddrum rep, Rick Hughes, just called me to say that he just saw the drumset for the first time, and he told me that they look amazing!

"Anyways, if you want to check out the exact kit I will be playing on tour, stop by the Ddrum booth. I have a signing session with Ddrum on Saturday, January 17 at 4 p.m, so make sure you drop by to say hello. More on my other signings when I receive exact info on them.

"I arrive this Saturday in San Diego and will get to Vic's [Garage, MEGADETH's newly built recording studio in San Marcos, California] sometime that afternoon to get ready to start tracking the new record. I haven't listened to any of the songs since I have been home, as I want to have fresh ears and perspective on these tunes. Perhaps this will feed me a few fresh drum ideas when I begin laying down keeper tracks."

MEGADETH's official fan club, MegaFanClub, has released the first video footage from Vic's Garage, where the group is completing the songwriting process for its new album. The December 20, 2008 clip includes footage of guitarist/vocalist Dave Mustaine and drummer Shawn Drover jamming out to a brand new song. (Note: You must a member of the MegaFanClub in order to view the video.)

Important: The NAMM show is **NOT** open to the public. The only attendees are NAMM member companies and their invited guests. 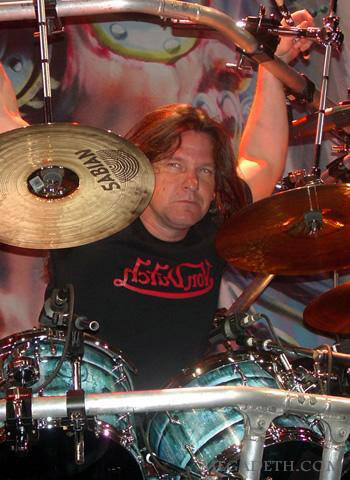