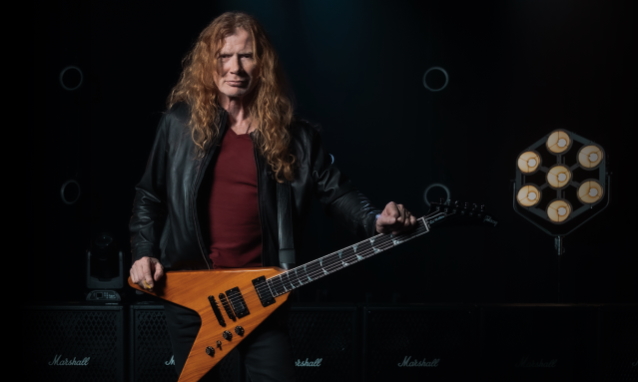 MEGADETH's DAVE MUSTAINE: 'If You're A Superstar, You Don't Really Need A Band'

During an appearance on the "Talk Is Jericho" podcast hosted by Chris Jericho, MEGADETH leader Dave Mustaine spoke about his working relationship with the band's lead guitarist Kiko Loureiro with whom he has collaborated since 2015. He said (as transcribed by BLABBERMOUTH.NET): "Kiko has a very playful nature. He's very much like a cat, with the way that he kind of plays around with certain things. I think the differences between dogs and cats are pretty obvious. Kiko is very cerebral with his thoughts; they're very calculated. And he's very much in his — I don't wanna say 'his own world' because that sounds disrespectful. But Kiko is very happy with his life and where he's going.

"We all face challenges at every stage in our life, and this is no different than anybody else," Dave continued. "Going out on a two-month tour when you have a set of five-year-old twins [as Kiko does] is challenging. But I think that the success of the record right now is setting the stage. As things change for us with our careers, as we start to learn how to conduct ourselves as businessmen, start to put a little bit of money in the bank, start to get a car, get a house, start to save some money and plan for the future, those are things that are all happening right now with Kiko and Dirk [Verbeuren, MEGADETH drummer]. [Kiko's] been at this a long time.

"This is really great now 'cause I told [Kiko] when I first met him, I said, 'Your life's gonna change. I don't care how big you think [your former band] ANGRA is' — 'cause I like ANGRA too — but I said, 'You're gonna go from being in ANGRA to being a star in MEGADETH.' And I said, 'If you play your cards right, you'll end up being a superstar.'"

Mustaine added: "I've always tried to paint the picture, the dynamic, I think, with the band. Sometimes the success of the band is based on the makeup of the pyramid of the band. You've got your marquee player, much like in hockey you've got your goal scorer. And then you've got your B-grade players — usually your supporting cast. And then your C-grade players, your defensemen, and then D grade, which are your grinders, your utility players. Establishing that hierarchy around your franchise player is what the success of the team is built on.

"When you have a band that's got, say, four guys; we'll keep it simple. And all four guys, they just play an instrument. They're not musicians; they just play instruments. They'll never make it. They'll never make it. So you have a band of four guys and they're all musicians. Will they make it? They'll probably be a really good cover band. If you have a band and you have one star in it, will you make it? Probably. But the other guys in that band won't be there when the smoke clears. If you have several stars in the band, there's a good chance they're gonna stick together the whole time, and there's a good chance that you're gonna go on to superstardom. If you're a superstar, you don't really need a band. You want a band sometimes. You find people you really like, but they don't always keep pace. And it's very much like being a wagon train. You can't have an ox next to a horse [pulling the wagon train]. They're unevenly paired up.

"I don't know if you've had to make any of those terrible things we call lineup changes. The worst part is when you have to make a lineup change with a friend," Dave said. "Like if you are playing in a band and you put it together with high school mates and you have to say goodbye to somebody, that's always painful.

"The thing I've always said is if you get in a band with a friend, prepare to lose both. I think when you have to say goodbye to those guys, a lot of times the friendship is over. So that's a caveat for young musicians. If you hire somebody based on their ability to play, then you don't ever have to explain to anybody why you got a bad bass player? 'Well, he's dating my sister.' 'Well, great. He sucks. He can't even play 'Dazed And Confused'.'"

Dave previously floated his theory about "superstar" musicians during a 2018 interview with mxdwn. Speaking about how the metal scene has changed since MEGADETH first started back in the early 1980s, Mustaine said: "I look at it like this: there's people that know how to make music, there's musicians, there's people that are stars, there's people that are superstars, right? A guy that knows how to make music can go sit on a piano and play 'Chopsticks'. A musician can play. A star is somebody that can play the piano and you'll go, 'Wow, that guy's really good.' A superstar is somebody who you've got that guy's record in your house somewhere already. … For example, LED ZEPPELIN — LED ZEPPELIN had four superstars. If you think of a band like, say, AC/DC, [they] had maybe, people would argue, two superstars: Angus [Young] and the frontman, right? So at times, especially when you have a high school band, maybe all four of you are just musicians, but one guy's got the spark and he's got what it takes. And maybe he becomes a star. And that's why most bands don't make it, because they've only got one guy that's a star and the rest are just musicians. I think we've been really lucky because [then-MEGADETH bassist] David's [Ellefson, bass] got moments of greatness where he goes from being a star to a superstar; most notably is the riff I wrote for 'Peace Sells…But Who's Buying?' When I showed that to him, he embraced it and people fell in love with his playing and the rest is history."

MEGADETH's new album, "The Sick, The Dying… And The Dead!" , will arrive on September 2 via UMe.