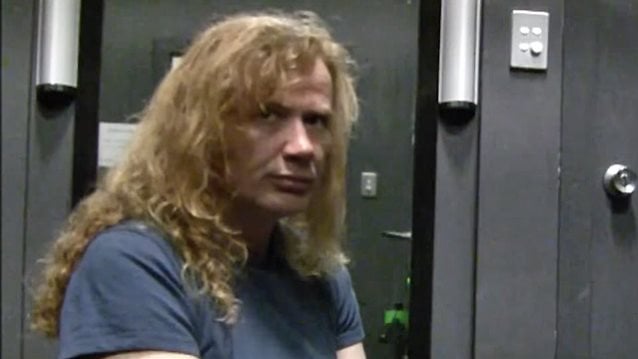 MEGADETH's DAVE MUSTAINE On 'Dystopia' Album: 'We Went Back To Making Music For Ourselves'

"Well, it's good for us for a lot of different reasons. One is, we went back to making music for ourselves. We've been saying that so much, and then you get into the studio and people start saying, 'Well, you know, this sounds like it could be a radio song. Let's put this one out.' And for this, we have a new management team, A&R, label… everything's new. So it's good for us, because that new blood… everybody who's working on the project are metal fans; they're not people who are in the music business and this is one of their accounts. [Adopts southern drawl] 'What's MEGADETH? I don't know what those guys are about.'"

On the changes in the music business:

"It's a lot different from when I first started, obviously. Even if it stayed exactly the same, it would change just because the faces would change. The technology would continue to evolve. But I think probably the most disappointing thing that's changed is there's a lot of people who are in the music business now that don't really care about music that look at it as a business — where the music business is music and business, and that's what their forte is. They don't get the loyalty to a band, they don't get why someone would get mad if their little bad gets successful. Because that's a very indie mentality — when we find a band we like that we don't know who they are, and it's like our band, and then when you see the sticker on one of the cars in your neighborhood, it's, like, 'Oh, those guys sold out.' But, see, that's the beauty of being a real true music fan — reading the jacket on the album…"

On whether his songwriting approach in MEGADETH is affected by the band's lineup changes:

"Not really. I think if you're true to yourself, the music's gonna stay true to itself too. You know, we've had a couple of songs that people have made their credo. Other people have songs that are ours that they can't be bothered to listen to; I think it's like that with any band. Like LED ZEPPELIN 'Hot Dog', I can't listen to that song. And I think everybody… if they're in a band, they have one of those least favorite songs; it's just the nature of the beast. So I look at getting those bad songs out of the way kind of… I don't know if you know the story or not, but 10CC was a real popular band back in the '70s and stuff, and everything that they did, they would make hits out of — everything. So one time they said, 'Let's try to purposely make a crap song.' And they wrote this song, I can't remember what it was, but it was a hit. And it's, like, man, talking about falling upward."

On what has kept him motivated to keep going with MEGADETH, despite all the setbacks:

"Well, I'd like to come up with some really brilliant motivational-speaker phrase that'll sell a bunch of postcards and crap like that, but I think that the truth of it is that I'm just stubborn and I want what I want. I think a lot of the setbacks have come because certain people have asked me to do things, and if I say no, it's really easy for them to say, 'Ah, Dave's an asshole.' It's like when I went to my first dance when I was in high school, and I went up to this chick — I remember it like it was yesterday — and I said, 'You wanna dance?' And she said, 'No.' And I went, 'Fuck you, bitch. You don't know what you're missing.' You know, rejection is something… It's a human nature we don't do very well with."

"You know, the music business, the odds of making it are so very slim. And I think part of the reason… Some of the things that have motivated me to keep going is that… I like the challenge. I don't take 'no' very well. And I think that that's been really inspiring for a lot of other people, because there's a lot of people out there that need someone to be their underdog, to be the one who goes out there and fights for them — be their 'Rocky' kind of guy, you know what I mean? And that ain't me, but, you know… [Laughs] I like the fact that I've given a lot of people a lot of encouragement and reason to face their demons. Because, yeah, there is a lot of stuff that's gone wrong. Some of it I did; some of it I did myself. Some of it was stuff that, wrong place, wrong time. Other things that happened… It's just a pure simple fact that the world's a great place with a lot of assholes in it."

On whether the decline of the music business has forced MEGADETH to spend more time on the road:

"It has had its effect on us; it's affected everybody, I think. The unfortunate part is the outlets where this music is able to be heard has gone away. iHeartRadio was something in the States that came to me years and years and years ago. I had iHeart Megadeth Radio. When it first came out, it was a huge success. And those guys got mad because I was saying, 'Look, you can't spell ZZ TOP with a little 'z' and a big 'z.'' [Laughs] So I kind of got off that whole thing. And I think that, as terrestrial radio kind of went the way of the Great White Buffalo and it's all gone satellite and stuff like that, it's real easy to build a following and have a great station and stuff like that. But also, there's a glut of people out there who don't know metal from their ass. And I think probably the worst thing right now, there's kind of a trend going on in music where everybody wants to be TMZ. Where they'll go after the guys in our own community. I mean, it's, like, we're all… I'm not gonna say, like, 'Hey, I'm the Jimmy Hoffa of fucking metal and we're all family,' or something like that. But, you know, if you're a metal site, why do you have to go after metal bands? It doesn't make sense to me. So I think that… Going back to the other question about my inspiration, why do I keep going with things that are hard like that? It gives other people a lot of inspiration too."

On how he achieves a balance between wanting to stay in touch with his fans and maintaining privacy in the age of social media:

"Now that everybody's telephone is a camera, you don't really have privacy anymore, especially if you're a public figure. So, as far as the social media is concerned, I think that if you have an honest relationship with your fans, you can joke around with them as much as you want. If people come into your house and they piss on your couch, kick 'em out. We have a real fun relationship with people at our sites, whether it's the Megadeth.com site or the Cyber Army site or any of our social feeds, and I think that's one of the things that personalizes us so that people, they know they can talk to us. But, you know, just like with anything, there's trolls in the world and they ruin it for a lot of people, so you've just gotta kind of have your 'assholeometer' on when you go to the social sites. MEGADETH, on October 31, 1994, we had released Megadeth Arizona, which was the very first band web site ever. And I remember, mentioning Gene Simmons, he said, 'I want this web site Dave has.' So we had really turned the music industry on its ass when we had the first site, and ever since then, we've been trying to stay ahead of the curve with technology and interaction, having fun, games, participatory things — just all kinds of different things where people can use the Net to communicate with us. I was just talking to my wife. I said, 'Do you remember when I bought that crazy little box back when we did Rock In Rio and you plugged it into the back of the TV with a phone cord and we could talk to each other through the TV?' Well, this was like facechat twenty years ago. And I was thinking how cutting edge that was for me to be thinking about stuff like that back then. Not that it was my idea — 'cause it sure as shit wasn't; it was somebody who invented it, and the reception was crap — but, you know, just always wanting to do that instead of going, 'Hey, honey, it's long distance. Bye.' [We were] always trying to use what the resources are at hand for us to comingle metal people with technology so that we can reach around the world. 'Cause when we first started, how did we find out about bands in Australia if we were Americans? We would find out from Kerrang! [magazine] or from fanzines or we were tape trading and stuff like that."

On the overuse of technology when it comes to bands performing "live":

"If a band can play a song live and they choose to use tapes or loops or stuff like that, and they don't play it live, I think they're shortchanging themselves, because there's that magic moment, interacting with the audience through music. And it's also, I think, duping the fans a little bit, because you're relying on a recorded moment instead of that moment that you capture in space in time, that split second of divinity where you have a note that makes a little bit of noise and sustains a little longer, a little different solo. So I think it's cool to rely on technology if you can't do the parts, but if you can, don't cheat, don't be lazy."

Due in January 2016, the new MEGADETH album, "Dystopia", will be the band's first to feature LAMB OF GOD drummer Chris Adler and Brazilian guitarist Kiko Loureiro, best known for his work with ANGRA.