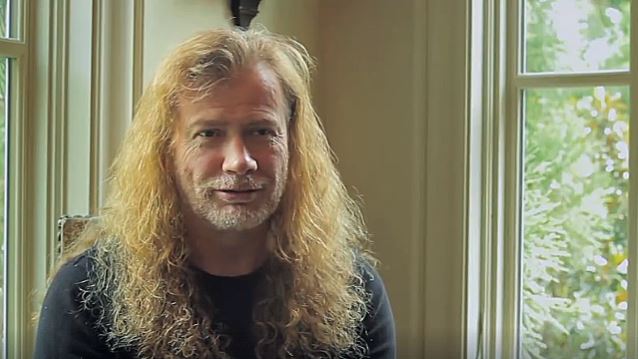 MEGADETH's DAVE MUSTAINE: What It Would Take For Another 'Big Four' Concert To Happen

MEGADETH mainman Dave Mustaine was interviewed on a recent episode of "Talk Is Jericho", the podcast of Chris Jericho, the world champion pro wrestler, actor, New York Times best-selling author and lead vocalist of the metal band FOZZY. You can now listen to the chat in the YouTube clip below.

Speaking about the possibility of there being more shows featuring the so-called "Big Four" of 1980s thrash metal — METALLICA, MEGADETH, SLAYER and ANTHRAX — in the future, Mustaine said: "I think that the 'Big Four' thing that we did, it was really important. It was necessary for a lot of different reasons. You know, if it happens again, that would be great. If it doesn't, the people who got to see it got to see something really remarkable."

He added: "Am I opposed to doing it? You know, it would have to be the right thing. I think that, you know, MEGADETH is at a place right now where we're successful to a degree where we would be happy continuing to do what we do on our own. So if we're gonna do another 'Big Four' thing, I would want it to be something where we walk away as content as METALLICA does from something like that. It's not METALLICA and three other dudes."

METALLICA, SLAYER, MEGADETH and ANTHRAX played together for the first time in history on June 16, 2010 in front of 81,000 fans at the Sonisphere festival at Bemowo Airport in Warsaw, Poland. The night before the concert, METALLICA organized a dinner with members of all four bands, a get-together that MEGADETH bassist David Ellefson called "very relaxed and comfortable" and "a class way" to ease into the tour. Mustaine concurred, telling Jericho: "It was very laid back, and I thought it was very enjoyable. [METALLICA bassist Robert] Trujillo was out front greeting everybody when we walked in the door, which was really nice. And he hugged me, which was, you know… It wasn't startling by any means — it didn't shock me or anything like that — but it was just a great way to start things. And when the night kind of rolled around to about 'It's time for Dave to go home' time, I decided I should probably leave. And I guess those guys roared into the night — the rest of my band and a bunch of crew guys, and they just had a great time."

Two days prior to the "Big Four" event in New York, rumors spread that MEGADETH had pulled out of the concert so that Mustaine could undergo surgery for stenosis, a neck and spine condition that he said was caused by "years of headbanging." Mustaine eventually had a change of heart and decided to go through with the performance, but struggled through the set due to the pain. He later told NY Hard Rock Music Examiner: "It was very close, the day after that. I was supposed to not do that show. I'd been laying in the emergency room getting ready to have them put me to sleep, and I’d said we had to cancel the concert. And one of the people associated with the concert said I was a pussy, and I thought, 'I'm a pussy. I'm getting ready to have two major spinal surgeries done and I'm a pussy. Okay.' Obviously, you don't know what pussy is, because that's not pussy."

In a 2013 interview, SLAYER frontman Tom Araya said that the only thing that was standing in the way of further "Big Four" shows was "the politics of character in one particular band." He continued: "We had an issue that came up on the New York show, which really freaked everybody out, but the New York show happened. I think, in all honesty, that was the last time we did the 'Big Four.'"

He added: "Those shows, basically, even though it was called the 'Big Four,' it was done through METALLICA. It was with METALLICA's blessing that allowed those shows to happen.