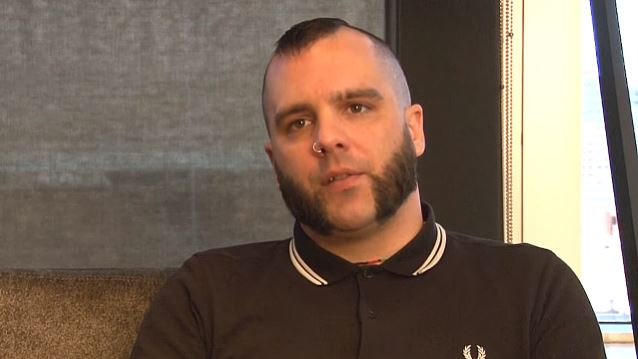 KILLSWITCH ENGAGE Singer On 'Incarnate' Album Title: 'I Love That It Sounds Epic And Causes Conversation'

KILLSWITCH ENGAGE singer Jesse Leach recently spoke to Artisan News about the band's seventh album, "Incarnate", which will be released on March 11 via Roadrunner. You can watch the footage below.

On the topic of the lyrical inspiration for "Incarnate", Leach said: "I wanted to be able to speak on current events — stuff that is relevant to us today, stuff that's in the headlines — but I wanted to do it in such a way where it's ambiguous enough where people can sort of draw their own conclusion. I just wanted to strike people to think. So that's one aspect of it. And the other aspect of it is speaking about my truths, like what I think. And I'd sort of separated myself from all that stuff — social media and the news and all the violence and racism that's going on in our media these days; I just couldn't deal with it. So in order for me to make a valid point that said something, I had to submerge myself into that stuff and really start paying attention to what's going on. And songs like 'Hate By Design', 'Alone I Stand', 'The Great Deceit' came out of those processes in writing. And the other side of it was the spiritual realm, the soul-searching stuff. I really had to re-evaluate myself, as far as where I am in my own mind, so I had to seclude myself. So it was a balance between submerging myself in all the terrible things that are going on and then distancing myself and finding solace and really doing some soul searching on my own, and both of those things happened while writing this record."

Asked about the album title "Incarnate" and how it inspired the CD's cover artwork, Leach said: "[The title] wasn't a catalyst for the record. It actually came when we were about three quarters of the way done with the record. Our bass player Mike [D'Antonio], who does all of our artwork and designing and t-shirts and everything, came up with the title out of nowhere. I'd actually sent him an idea I had for the album cover, which… I came out of a nightmare and had a dream of a man being pulled apart by two snakes and two cranes, and his insides kind of, like, coming out, which is pretty graphic and not really our style for KILLSWITCH, but it was the image that we used and had transformed by another artist. And then he said he was looking at it and the word 'incarnate' just came to him. And I thought, 'What a great word!' It just sounds good, it's ambiguous enough where people can draw their own conclusion, and the definition of it is 'in the flesh,' which is almost like an ambiguous definition. So it just sort of causes thought, and I love that about it. I love that it just sounds epic and causes conversation."

KILLSWITCH ENGAGE will embark on a North American headline tour shortly after the new album's release. They will be joined by MEMPHIS MAY FIRE and 36 CRAZYFISTS for the trek, which runs from March 16 in San Antonio, Texas to April 24 near Charleston, South Carolina.