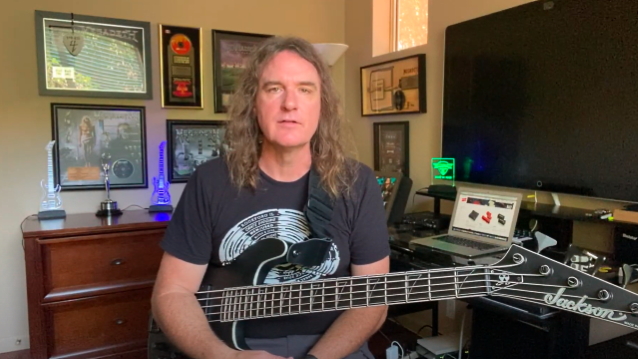 MEGADETH bassist David Ellefson is featured in the latest episode of EMGtv's EMGtv Remote. In the three-minute clip below, Ellefson talks about his history with EMG pickups.

For MEGADETH's "Rust In Peace" tour in 1990, Ellefson and Jackson collaborated to craft the brand's first ever five-string bass model that would hold up to the thrash bassist's crushing tone. This original five-string custom Jackson bass quickly became Ellefson's go-to for the next three years of worldwide touring, and eventually served as the foundation for his signature Jackson Concert Bass lineup.

To celebrate the 30th anniversary, Jackson has revisited this original design.

Earlier this year, Ellefson told Guitar World about his all-new X Series Signature David Ellefson Concert Bass CBXM IV and V models: "My goal has always been to invent and develop very high-octane, cutting-edge instruments. I prefer basses that look like they move fast and move forward. With that said, while trying to bring the brand ahead, there's something to be said for going back to the classics.

"As with MEGADETH, and indeed with the entire concert business, sometimes the best way forward is to go back in time, and to create a classic, traditional instrument that still has all the usual Jackson-isms.”

He added: "This is a bass that you can play at a MEGADETH show, or in a country band, or in church, and maybe even in a jazz band: somehow it works in all those environments. As you go down the neck there’s a brightness and an attack from the maple fingerboard that comes across, and I went back in time with the P/J setup.

"The very first Jackson basses that I got from Grover Jackson back in the day had that configuration, because I noticed that if you flipped the P pickup to the reverse position, with the lower magnet towards the neck than towards the bridge, it got rid of an annoying low-mid frequency that just doesn't work in a metal setting, because it gets the bass right down inside the kick drum."