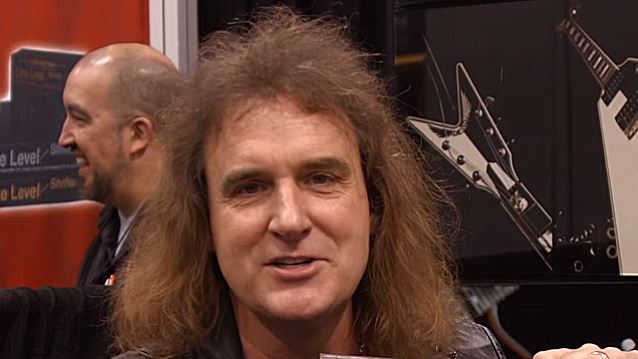 During an interview with former RIP magazine editor Lonn Friend at last month's NAMM show in Anaheim, California, MEGADETH bassist David Ellefson was asked if he has ever been able to go up to artists who influenced him and tell them how much of an inspiration they have been on him and that they are the reason he is doing what he is doing.

"I told [former VAN HALEN bassist] Michael Anthony that," Ellefson said (see video below). "In fact, I saw him the other night at the Peavey party, and I told him… I didn't tell him last night, 'cause I've seen him over the years here. I just said, 'Look…' 'Cause he is the sweetest, nicest guy — [he's] just so cool. And I said… Not just his bass on those [classic VAN HALEN] records. His vocals… his singing… I always say… When we [MEGADETH] were writing 'Peace Sells', we were in the band room, writing 'Peace Sells', and at the end, [sings] 'Peace sells, but who's…', I immediately go, [sings higher] 'Peace sells, but who's buying.' I immediately go for that… I call it the 'Michael Anthony harmony.' 'We've gotta get the 'Michael Anthony harmony' in here.' So anytime I'm on a bandstand and there's a vocal, I'm, like, 'I'll take the Michael Anthony part.' So he's, like, defined in my book as a… basically, he's an instrumentation. So I got to tell him that. And he's very humble. But it's always nice to tell people who changed your life, to let them know what they did."

Ellefson is heading to Australia in March for a spoken-word tour. "An Evening With David Ellefson" will feature stories from life on the road and about life as a founding member of one of the biggest metal acts in the world, documenting all the trials and tribulations. The night will also feature a bass demonstration and audience question-and-answer session which will allow fans to delve deeper into all things MEGADETH and David's autobiography, "My Life With Deth", a story about the complex history of the band.