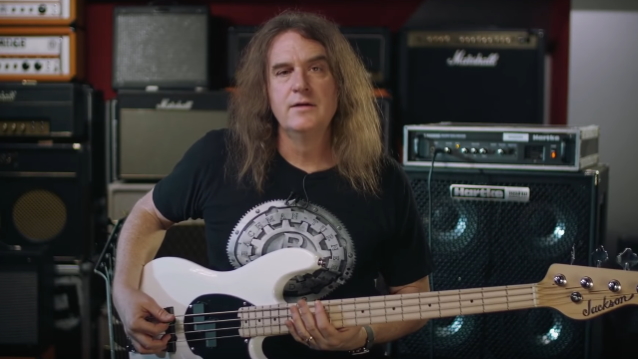 Scott's Bass Lessons has shared a new video in which MEGADETH's David Ellefson shares his top bass techniques. This is your chance to investigate this hardcore bass style with one of the most influential bass players in thrash metal.

In a fall 2020 interview with Guitar Summit, Ellefson was asked if he ever played with his fingers before switching to playing with a pick/plectrum and if so, what prompted the change. He responded: "I learned how to play with my fingers. As I got into the real world of playing in bands, when I had these little amps, playing with guitar players who had 50- and 100-watt Marshall half stacks against big, loud, banging drummers, I couldn't hear myself. So I grabbed a pick. And all of a sudden, I could dig in and get a percussive attack that allowed me to be heard. And that was why I picked up the plectrum. It wasn't because I was trying to be like somebody else. It was literally a survival tactic.

"As I moved to L.A., we started MEGADETH, and I was trying to be sort of a finger aficionado, but as we were playing, it looks impressive, and people are, like, 'Oh, you look so cool,'" he continued. "To hell with looking cool. It's about can you freakin' play to a click track.

"Bass playing is about three things — actually, all of music: what note you play, where you play it, and how long you play it. That's music. You can take all of music ever in the history of the world, and those three factors apply to all of it. Same with bass. What note are you playing? How long are you playing it? And where are you placing it? So those three elements are always what's required. And especially when you get into the studio and you start cutting records. Pretty much, nine times out of 10, even today, when I walk in with a pick and I plug in, I hit a note, and they're, like, 'That sounds great.' And then I'll move to my fingers, and they'll look at me and go, 'What'd you do? What happened? The tone changed.' And I go, 'Oh, I switched over to my fingers.' And they'll be, like, 'Yeah, don't do that. Put the pick on. The pick sounded better.' It just sounds better.

"Recording engineers love clarity," Ellefson added. "Their job is to get things clean, clear [and] precise so that it translates to the mix and to the final product. And the cleaner and clearer you can get a bass to tape — Pro Tools, if you will — is the big win. So, for me, the plectrum usually wins in most cases."

Ellefson's latest comments echo those he made in October 2018 at the Bristol, England stop of the European leg of his "Basstory" tour. At the time, he said: "For me, I ended up picking up a plectrum, a pick, mostly because you guitar players are always too loud. And I was in bands where I could afford amps about that size [points to a small amp], as a kid, and I couldn't afford big Ampeg SVTs and big stuff like that. And guitar players would get 50-, 100-watt Marshall half stacks and we would have to turn them against the wall, 'cause they were so loud. Because the sound man, when he does this [lifts arms above his head an shakes his head], that means the P.A. is off, you're not in it and you're too loud. And most guitar players go, 'Fuck that, dude! I'm gonna fucking play loud.' Pardon my language, but that's just kind of how guitar players are. So in order to compete with that, I picked up the plectrum, because when I got in a band, all of a sudden, that got in the mix; now I was in the room finally and got inside the kick drum. I learned that later making records about how to get my bass kind of right inside that kick drum, so as the drummer… as that beater hit the skin, that was the cannon and I was the cannonball right behind it. But that really is my philosophy."