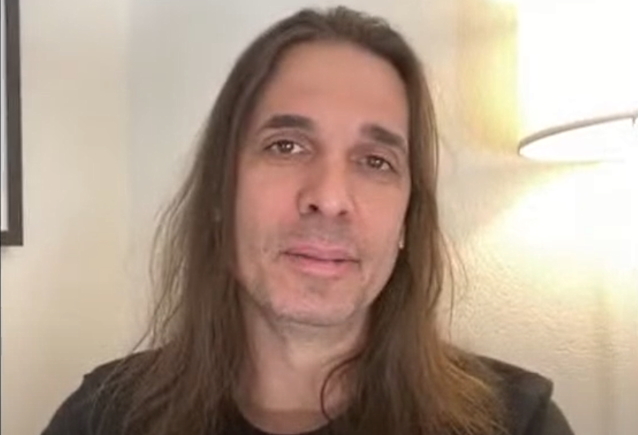 In a new interview with Tulsa Music Stream, MEGADETH guitarist Kiko Loureiro was asked what it's been like to play with bassist James LoMenzo who rejoined the band last year. He responded (as transcribed by BLABBERMOUTH.NET): "It's amazing. It's great. James is such a great guy. [He has] a lot of stories. He's an experienced guy, fun to hang [out with], a great player — a hundred percent. I don't hear any wrong note. A great vibe onstage. And then backstage as well. He played with so many great musicians and bands. So, yeah, just listening to his stories is amazing. And then he [gets] along well with Dave [Mustaine, MEGADETH leader] as well, so that's a good thing. Yeah, so far so good."

Last month, Mustaine told SiriusXM's "Trunk Nation With Eddie Trunk" that he was "thrilled" to be playing with LoMenzo again. "I think he's a really awesome person to have in MEGADETH," he said. "He was when we tried it the first time. And for whatever reason that things happen, things happened and we took a little sabbatical from playing [together]."

The bass tracks on "The Sick, The Dying, And The Dead" were laid down by Steve DiGiorgio, who is widely renowned as a pioneer on the fretless bass in heavy metal music, having played with TESTAMENT, DEATH and SADUS, among others. Within his genre, Steve is respected for his playing skills, versatility and incredible technique. He has more than 40 studio album recordings and over 20 years of touring the world.

Three months ago, Mustaine confirmed that James LoMenzo will play bass for MEGADETH when the band returns to the road this weekend for the second U.S. leg of "The Metal Tour Of The Year". Joining them will be co-headliners LAMB OF GOD along with special guests TRIVIUM and IN FLAMES.