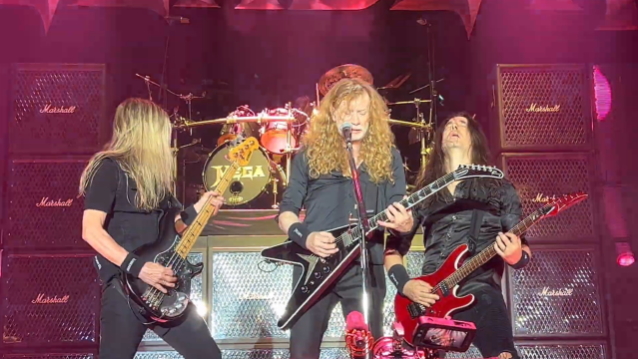 MEGADETH's New Single To Arrive Next Week; 'The Sick, The Dying And The Dead' Album Now Due In September

MEGADETH is teasing a June 23 release date for what will apparently be the first single from the band's upcoming album, "The Sick, The Dying And The Dead". A captionless image was shared on MEGADETH's social media earlier today featuring the numbers "6:23", referring to the aforementioned date.

During an appearance at last weekend's Download festival in the United Kingdom, MEGADETH leader Dave Mustaine told the crowd that the single would arrive on July 23 (see video below), but it is now believed that he misspoke and gave the wrong month. Mustaine also revealed that "The Sick, The Dying And The Dead" will now be released in September, after he previously said the LP was expected on July 8.

The follow-up to 2016's "Dystopia", "The Sick, The Dying And The Dead" features a cover of DEAD KENNEDYS' "Police Truck" and Sammy Hagar's "This Planet's On Fire", the latter of which includes vocals from Hagar himself.

This past March, Mustaine told SiriusXM's "Trunk Nation With Eddie Trunk" about the upcoming MEGADETH album: "I know that we've got a single that is gonna be serviced to radio any day now. It's a song called 'Killing Time'. Obviously, that's [written about] somebody in my past, but it's not as obvious as it sounds; it's wasting your time, not time to kill things. And it had to do with some of the situations that myself and the different band guys have gotten themselves into with the band over time. And I'm sure a lot of people are gonna relate with that. So that one, it's gonna be sent to radio, gosh, any day now."

Dave also said that he hoped to open some of the upcoming MEGADETH shows with a new song called "Night Stalker". "It's got some sounds in it that is something we're gonna incorporate into the beginning of our show," he said. "And it's a track that we have… my buddy Ice-T had guested on."

Mustaine spoke in more detail about "Night Stalker" in a separate interview with Jose Mangin of SiriusXM Liquid Metal. He said: "It's a brutal song. I can't remember if that was the fastest one [on the new album] or not. But 'Night Stalker' is about the 160th Battalion with the United States Army, and it's all the black-ops helicopters that go in at night — nobody knows they're there; they're in, they're out. And I had my buddy Ice-T join me on a part in the middle of it, because Ice was a ranger for the army, and he did two tours over in Afghanistan, I think it was. I think that was back in '91, when I first met him. It might have been a little earlier than that, but I know he was a ranger. And I had just done something on his last record. But when I asked him, I thought it would be great to have him because of his bravado and then the fact that he's got real credibility as someone who was there. And then we've got several other guys to participate in the track just to make it as real as possible. We're going up to the base to go film a bunch of helicopter footage and sounds and stuff like that. We've got three videos that we're making for this record right now down in Brazil, and we're combining all that production and the stuff from the base, with the helicopters and everything together, to make this first three-song video offering up."

Regarding Hagar's contribution to "This Planet's On Fire", Mustaine told "Trunk Nation With Eddie Trunk": "It's a super-heavy song. And the good thing about this [is] we didn't just do the song; [Sammy] played on it too. So we've got a little bit of some guitar; we've got a lot of bit of singing. I think it's super badass."

Earlier this year, Mustaine confirmed that TESTAMENT bassist Steve DiGiorgio laid down the bass tracks on "The Sick, The Dying And The Dead".