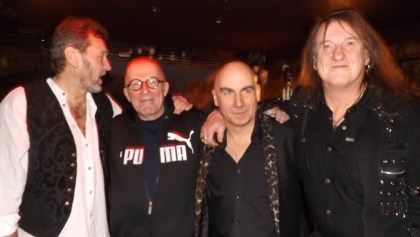 Maiden77, an online site dedicated to the early days of IRON MAIDEN, arranged for four of the five members of MAIDEN's 1977 lineup to get together for the first time in 37 years on Saturday, February 21 in London, England.

The ex-MAIDEN members all got on well and are looking at recording the IRON MAIDEN songs as they were originally played back in 1977.

Moore reportedly played only one gig with IRON MAIDEN, after which it became apparent that keyboards didn't fit the band's sound. He later became a touring keyboardist with CUTTING CREW. Purkis left MAIDEN at some point in 1977, but Willcock and Wapram remained in the group for another year.

Willcock is currently working on a project called GV1 and shows are being lined up.

Also pictured below is an IRON MAIDEN setlist from 1977, showing that songs from the band's first album and "Killers" were already being played in some shape or form back in those days.