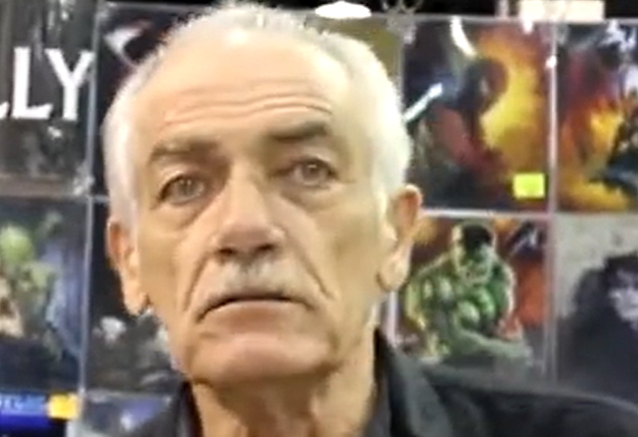 Members of KISS, MANOWAR, RAINBOW and ANTHRAX are among the musicians who have paid tribute to Ken Kelly, one of the most successful fantasy artists of all time, who died on Thursday (June 2) at the age of 76.

Original KISS drummer Peter Criss wrote on his web site: "I am heartbroken to hear of the passing of my dear friend Ken Kelly. He was an amazing man and talent. A gentle, kind, funny honorable man. A man of integrity and grace. I loved him so much. His art work graced the cover of two of our iconic albums. He brought out the super heros in us. He will live on through his incredible work. My prayers and love go out to his family and fans. May he rest in peace with the Lord. God Bless, Peter Criss".

MANOWAR bassist Joey DeMaio said in a statement: "Deeply saddened by the passing of the great Ken Kelly. He was a giant and will live forever through his art and the memories he left with those who got to know him. I will never forget our years together. Condolences to his family. RIP, Ken. Valhalla awaits you."

RAINBOW leader Ritchie Blackmore said about Kelly: "He was a very nice man. Very easy to work with. I gave him a simple idea, which he turned into a magical picture. He shall be greatly missed. RIP Ken Kelly".

Over Kelly's 50-plus-year career, he has focused in particular on paintings in the sword and sorcery and heroic fantasy subgenres.

Early in his career, he was able to study the paintings of Frank Frazetta in the latter's studio, but Frazetta never let out his trade secrets. In the early 1970s, he did a couple of cover paintings for Castle Of Frankenstein magazine. Throughout the 1970s, he was one of the foremost cover artists on Warren Publishing's Creepy and Eerie magazines.

His work often portrayed exotic, enchanted locales and primal battlefields. He developed the artwork for COHEED AND CAMBRIA's album "Good Apollo, I'm Burning Star IV, Volume Two: No World for Tomorrow", and a painting of his was used as the cover art for ALABAMA THUNDERPUSSY's 2007 release "Open Fire". In 2012, one of Kelly's paintings was used for the cover of ELECTRIC MAGMA's 12-inch vinyl release "Canadian Samurai II".

Kelly has been a guest at the Kiss By Monster Mini Golf course in Las Vegas, Nevada, doing autograph signings of prints for the classic KISS albums he has drawn cover artwork for.

Sad to find out Ken Kelly, who painted our Destroyer album cover passed away. A kind and beloved gentleman. Rest In Peace. https://t.co/rNxoDve2T8

A moment to remember the great Ken Kelly. His fantasy art captured the larger than life image of KISS perfectly. Rest In Peace. pic.twitter.com/6KawKXdOjE

Deeply saddened by the passing of the great Ken Kelly. He was a giant and will live forever through his art and the memories he left with those who got to know him. I will never forget our years together. Condolences to his family.

RIP Ken Kelly, artist for No World for Tomorrow. 💔 pic.twitter.com/LqNHmNgMCl

R.I.P. #kenkelly one of the all time greats. The art he created was my guide to drawing #destroyer#lovegun#rainbowrising@kisshttps://t.co/T11QTLPoSZ

He was a very nice man. Very easy to work with. I gave him a simple idea, which he turned into a magical picture. He shall be greatly missed. RIP Ken Kelly https://t.co/RTnjG8PavZ

So sad to hear #RIPhttps://t.co/tWSlpLyiVb

Ken Kelly the artist that painted Burning Starr's last 3 album covers has passed away, He was a great artist and helped…

We are saddened to hear of the passing of our brother Ken Kelly.

No words can express what a terrible loss this is, not...