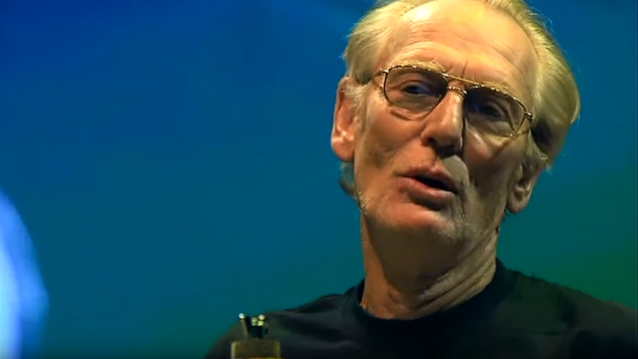 Members Of RUSH, QUEEN, THE BEATLES, THE ROLLING STONES, WHITESNAKE, Others Pay Tribute To GINGER BAKER

Members of RUSH, QUEEN, THE BEATLES, THE ROLLING STONES, RED HOT CHILI PEPPERS, WHITESNAKE and THE KINKS are among the musicians who reacted on social media to the passing of Ginger Baker. The legendary CREAM drummer died yesterday (October 6) at the age of 80. Baker's family posted a message to fans on Twitter, stating he "passed away peacefully" at a hospital in the United Kingdom. "He was in no pain and had recently been able to see and speak to his children, close family and special friends," his daughter Nettie Baker told CNN in a statement.

Baker had been diagnosed with chronic obstructive pulmonary disease, in addition to chronic back pain from degenerative osteoarthritis. In 2016 Baker was forced to scrap a string of live dates after undergoing open-heart surgery.

Back in 2013, Baker told Rolling Stone that his health was "not good. It's troubling. At the end of the gig I'm absolutely exhausted. I've got degenerative osteoarthritis, which is extremely painful and I'm on a regiment with a health service pain management control. Apart from that I've got COPD from smoking."

During his musical beginnings on the London jazz scene of the late 1950s, Peter "Ginger" Baker forged a name for himself for his unconventional drum setup and flamboyant style. In 1966, after seeing Eric Clapton play in London, he formed the power trio CREAM with Clapton and bassist Jack Bruce. Over the next two years, CREAM sold 15 million albums, scoring such hits as "White Room", "Strange Brew" and "Sunshine Of Your Love".

Baker, who gained a reputation as the most uncontrollable musician on the scene, was the subject of a 2013 documentary, "Beware Of Mr. Baker", which painted the title character as a chain-smoking, profanity-spewing, mean-spirited, entitled, grouchy, vile and self-destructive man with otherworldly talent and tragic flaws.

Ginger Baker, great drummer, wild and lovely guy. We worked together on the 'Band on the Run' album in his ARC Studio, Lagos, Nigeria. Sad to hear that he died but the memories never will. X Paul pic.twitter.com/Rne4tn6A2i

Sad news hearing that Ginger Baker has died, I remember playing with him very early on in Alexis Korner’s Blues Incorporated. He was a fiery but extremely talented and innovative drummer. pic.twitter.com/tZg3IGwP4Z

- he always had nice things to say about the Kinks - i feel bad but he had a good run - love and blessings Dave Davies nice drumming in this song @GingerBDrumshttps://t.co/sTZJHvp1FC#RIPGingerBaker 2/2

Sad to hear of the passing of this legend. I was always first and foremost a fan of Cream & so getting to record and play live with Ginger Baker is a very big part of my pro career. Ginger could be difficult, sure, but he was truly unique behind that drum kit.
R.I.P Ginger. 🥁❤️ pic.twitter.com/c5wjRdnhH7

1/2 As a young musician few drummers stood taller or were a bigger musical influence than Ginger Baker...I will never forget the awesomeness of seeing him perform with Cream at Massey Hall on June 5 1968 along side the late great Jack Bruce and Eric Clapton. pic.twitter.com/U033iRN1ke

RIP Ginger Baker - who thrilled us all with his massively innovative drumming in CREAM. When I advertised on my (Imperial) College notice board for a drummer to form a group with, I put “‘Wanted : a drummer who can… https://t.co/FnDtbN91Sr

Fly free Ginger....Crazy, happy memories of your time with us.... #GingerBaker#Legend#Anhonourpic.twitter.com/KoOKI1Hitk

Statement on the passing of Ginger Baker: https://t.co/ScvekUVqKepic.twitter.com/nZwCoG1rUX

So much freedom in his playing. What a wildman. Rhythms we’ve hear all our lives he plucked them out of the sky. Rest In Peace Ginger Baker. https://t.co/e3L4IHodhT

Ginger Baker was a big influence when I was in my teens. The Cream were one of my favourite all-time bands. I went to see them 8 times. Ginger was always on fire!