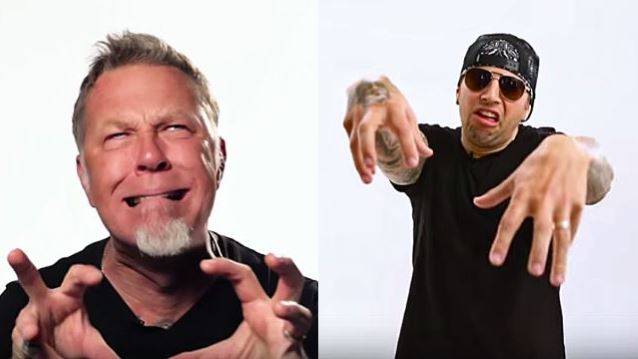 METALLICA And AVENGED SEVENFOLD Members 'Audition' For 'Call Of Duty'

According to The Pulse Of Radio, METALLICA frontman James Hetfield and AVENGED SEVENFOLD singer M. Shadows are among the celebrities who are seen "auditioning" in a new promotional clip to play zombies in the upcoming video game "Call Of Duty: Black Ops 3". The clip is part of a contest for players and fans to win a chance to become a zombie in the game, which will be released on November 6.

The contest also has a charitable component, with proceeds helping veterans find work.

METALLICA and AVENGED SEVENFOLD are no strangers to showing up in video games and Shadows told The Pulse Of Radio a while back about the experience of being digitally captured for an appearance in "Call Of Duty: Black Ops 2". "We had two full days of motion capture, so the band went in there, put on silly outfits and we danced around and pretended like we were playing in front of an audience," he said. "Hopefully none of those pictures will leak. But we did that, and then we went in there and for vocals I had to sit there and put my head in this vise, and they did motion capture of me singing the words a bunch of times. Between acting and pretending that you're playing onstage when there's nobody there, it was a pretty fun experience."

AVENGED SEVENFOLD has been working on a new album and recently parted ways with drummer Arin Ilejay after four years.