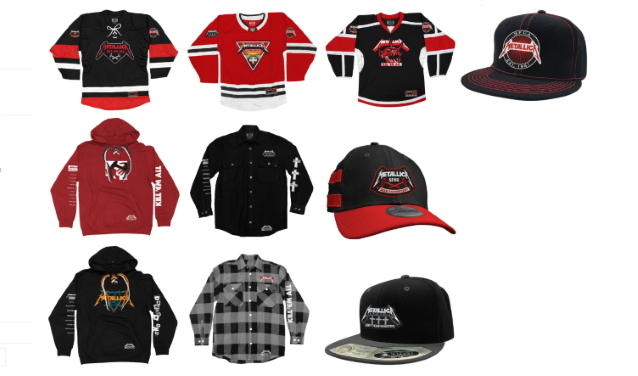 Puck Hcky, the hockey-based fashion brand, has announced a new relationship with heavy metal legends METALLICA to deliver a new collection of items.

The METALLICA x Puck Hcky collection includes hoodies, flannels, jerseys and hats, all inspired by the band's music and art. In addition to the merch METALLICA will be carrying in the Met Store, Puck Hcky will also be selling a few pieces exclusive to its store.

The collection has just dropped and is available at www.puckhcky.com.

In the past, METALLICA has performed before San Jose Sharks hockey games, and the Sharks have been using the band's 1983 song "Seek & Destroy" as their entrance music for a long time.

"Who would have thought back in 1982 when we wrote that song that that song would have that kind of mileage on it?" METALLICA drummer Lars Ulrich asked. "And even to, obviously, be able to write a song and have your name associated with a piece of music that plays that kind of role in so many people's lives all over the world. And in this particular case, the fact that the Sharks [come] out through a giant shark mouth and the smoke and the fire and the music and the energy in the building and so on… it's obviously… it's one of your proudest moments. It's a very cool thing to be associated with."

"I still can't believe that they picked 'Seek & Destroy', which I love," laughed METALLICA frontman James Hetfield. "1983, what we were writing about then was just… That's all we knew. We're gonna show up, and we're gonna kick some ass. And when we leave here, you're gonna know we were here."

Hetfield continued: "I understand why it's been chosen. But when I hear my voice [on the original recording of the song]…. Oh my God! I was, like, 19 years old, and I think I've matured a little bit since then… maybe a little bit. But it's awesome. It sets a tone. The sound quality… not the best, but that's all we knew in '83. But I love the fact that someone has taken our song and is still using it like that. And it's synonymous with Sharks hitting the ice, coming out of the mouth, through the teeth, and then the smoke… Very awesome."