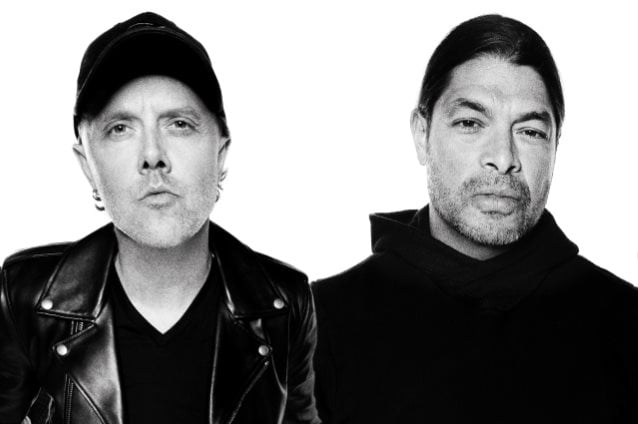 METALLICA bassist Robert Trujillo has defended Lars Ulrich against online criticism of the the Danish skinsman's technical ability, saying that "the really great drummers have mad respect" for his bandmate's "unique style of playing."

Ulrich has been the butt of jokes for more than two decades after his drumming patterns were simplified, seemingly in response to the more mainstream nature of METALLICA's music, with some even suggesting that his actual ability has degraded over time.

However, Trujillo makes it clear in a new interview with Drum! magazine that admires Ulrich's playing, to the extent that he can bristle at those he perceives as less appreciative.

"I've played with the best drummers in rock, ranging from Josh Freese to Brooks Wackerman to even Dave Lombardo," Trujillo said. "And these guys respect Lars. They know he has a unique style of playing and production. Some drummers who don't have the kind of success Lars has had are quick to pass judgment. I don't know if it's jealousy or whatever. But the really great drummers have mad respect for him."

Robert also talked about what it's like being a part of a rhythm section with Ulrich, saying: "From when I joined the band, Lars has just grown better. The pocket has come a long way. That's why I feel that his ability to groove has blossomed even more on the new album. We're growing as a rhythm section. That's a beautiful thing, because I feel that the whole band, as a unit, is still challenging itself."

"Lars likes to play," Trujillo added. "By that I mean that he likes the drums to have a voice. It reminds me of the way Jaco [the great American musician/composer Jaco Pastorius] played: They both have a melodic quality that fits in really well with anybody they work with. There's a lot of personality in Lars's drumming. That's what makes it unique."

Ulrich said in a recent interview with the "Talk Is Jericho" podcast that he lost interest in showing his technical prowess around twenty-five years ago and began focusing more on improving his skill at keeping steady time. "Since around I guess the late '80s, the only thing that's really interested me is just doing the best thing for the song," he explained. "And sitting and doing the Phil Rudd four-on-the-floor [a technique where drummers strike the bass drum on every beat in the measure], when it calls for that, that's really what I love to do. And just to be able to make James's [Hetfield] riffs swing and to make it kind of bounce and to do all that type of stuff. I just turned a corner where I just stopped being interested in trying to do thirty-two paradiddles standing upside down backwards fucking Lombardo style. It's, like, let Lombardo be Lombardo and I'll kind of just do my own thing. But everybody goes through periods of that kind of thing, and I got mine out of my system pretty early. And, like I said, for the last twenty-five, thirty years or whatever, it's just been more about making it swing, and that's what I'm happy to do."

METALLICA will head out on a major world tour in support of the set later this year, with North American dates rumored to begin in late spring.