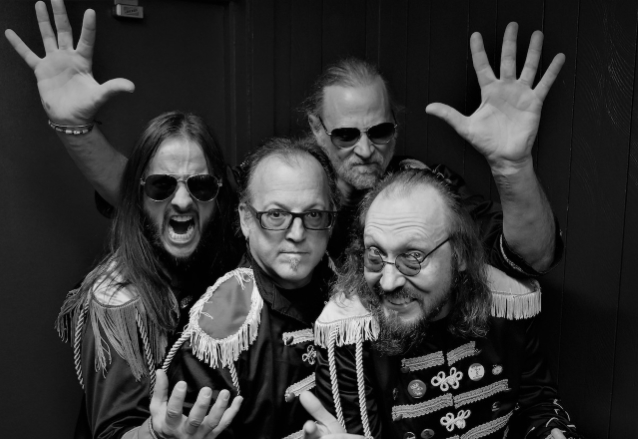 BEATALLICA, a satirical mashup act whose hilarious schtick marries the songwriting prowess of THE BEATLES to the deep-throated rock growl of METALLICA, has signed with Metal Assault Records. The band's fourth full-length album — and its first in more than seven years — will be released later in 2021.

Metal Assault first got introduced to BEATALLICA in 2010 when the band toured the West Coast and performed at the now-defunct Key Club in West Hollywood, putting on the kind of performance only they can. Subsequently, Metal Assault interviewed BEATALLICA and kept track of the band's progress over the years, as they took their show on the road all over the world, garnering a global fanbase, to go with heaps of praise from members of METALLICA and the like, as well as from journalists everywhere.

While we wait for the new album to get ready for release, Metal Assault Records has added BEATALLICA's three existing full-length albums for purchase at the band's new Bandcamp store.

Back in 2005, the members of BEATALLICA received help from METALLICA drummer Lars Ulrich in their dispute with Sony Music over BEATALLICA's "unlawful use" of the group's compositions "without authorization or license." Sony Music accused BEATALLICA of violating copyright laws, demanded that their webmaster pay "unspecified damages," and forced the band's ISP to shut down their web site. Thanks to Ulrich's efforts, BEATALLICA was soon back online, and the legal debacle was over.

"The Internet is a swamp of piracy, so you send out cease-and-desist letters all the time," METALLICA lawyer Peter Paterno said at the time. "Someone at Sony probably saw this site and sent out a letter and once they realized what was on it they decided it was not something worth picking a fight over. They got that this is different from someone selling BEATLES CDs and not paying royalties."

BEATALLICA frontman Jaymz Lennfield (a.k.a. Michael "Tinker" Tierney) later told River Cities' Reader that he believed his band's music had the legal protection of parody. "We think we're making something new, especially lyrically," he said. "It's definitely a creative process... Legally and creatively, stuff like this hasn't been done before."