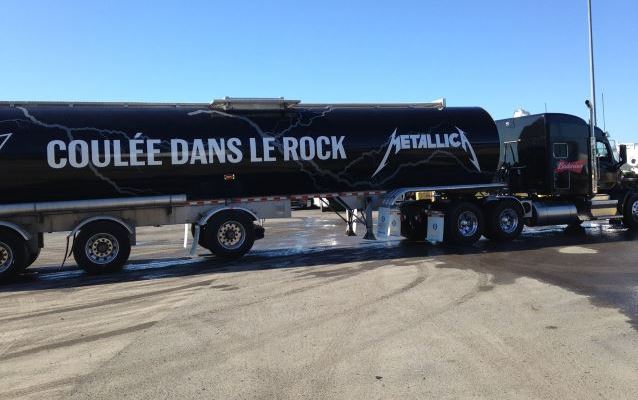 METALLICA has teamed up with with beer company Labatt to produce a limited run of METALLICA-branded Budweiser brew. The beer will be made available on September 28 as a tie-in promotion for METALLICA playing the final show at Quebec City's legendary Colisée Pepsi this past Monday (September 14) and giving the opening concert at the brand new Centre Vidéotron on Wednesday night (September 16).

On Wednesday, a tanker truck filled with Budweiser was parked in front of the Centre Vidéotron. Once the METALLICA show was finished, the tanker headed to the Labatt plant in LaSalle, near Montreal.

Photos of the tanker truck filled with the METALLICA-branded beer can be see below.

The beer will be made available in cans, with more than 91,000 black containers being distributed to mark the historic transition from the old venue to the new arena.

METALLICA's only other date before the end of 2015 is this Saturday (September 19) at the Rock In Rio festival in Brazil.