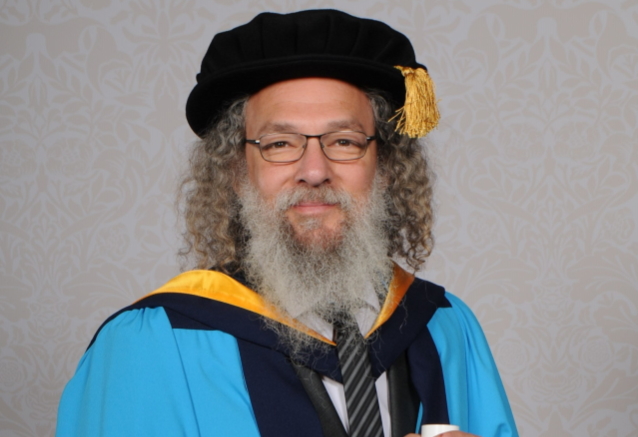 Andrew Scheps, who is credited as a mixing engineer on METALLICA's "Death Magnetic" album, has been awarded an honorary doctorate from the University Of Huddersfield for services to international music engineering.

Scheps is a renowned sound engineer having engineered and mixed the music of some of the biggest bands in the world: GREEN DAY, RED HOT CHILI PEPPERS, WEEZER, AUDIOSLAVE, BLACK SABBATH, METALLICA, LINKIN PARK, HOZIER, KALEO and U2. He visited the University of Huddersfield to receive his Honorary Doctorate of the University for services to international music engineering.

Scheps said: "At Huddersfield, I love the combination of very in-depth study of parts of the process but always letting people get through a project and understanding every aspect of it. Students really have an idea of what expect when they come out of here. It's a really great foundation."

Alongside the prestigious honorary doctorate, Scheps has been awarded the title of "Visiting Professor" following nomination by Dr. Mark Mynett after their work together on the "Heaviness in Metal Music Production" (HiMMP) Research Project. The role is given to those with an academic or professional standing equivalent to that of a professor, and who collaborates with the University in a significant manner.

Said Mynett: "The Music Technology and Production team are absolutely delighted to have the legendary Andrew Scheps as our Visiting Professor. Andrew's production and mixing discography speaks for itself, and he will be a huge inspiration to our students, especially as they will benefit from his lectures."

The HiMMP Research Project is the world's first academically funded research project into "perceptual heaviness" in music, with the U.K.'s Arts and Humanities Research Council investing over £250,000 into the project. HiMMP seeks to define "heaviness" in metal music with definitions from some of the genre's leading producers.

The project will see these producers mix a multi-track representing different metal-music characteristics, with accompanying video interviews explaining the process. The first of these will be Scheps.

Though starting out as a musician, Andrew found that what he enjoyed most was working behind the scenes. He toured with Stevie Wonder and Michael Jackson, but he found his home in the studio, working for producers such as Rob Cavallo, Don Was and Rick Rubin.

After 25 years in Los Angeles, Andrew relocated to the U.K. in July 2015 where he set up his own mix room which is now equipped for Dolby Atmos Music.

Shortly after "Death Magnetic"'s release, a controversy broke out over the LP's audio quality, with some fans and publications accusing METALLICA and producer Rick Rubin of mixing the album at such a loud volume that the music was distorted and difficult to listen to.

Ted Jensen, the engineer who mastered the album at Sterling Sound in New York, later responded to fan complaints, saying that "the mixes were already brick-walled before they arrived at my place" and added that he was "not proud to be associated with this one."

Over the course of the next couple of weeks, we're thrilled to be awarding several talented figures for their work...

Posted by Computing and Engineering at the University of Huddersfield on Wednesday, July 13, 2022