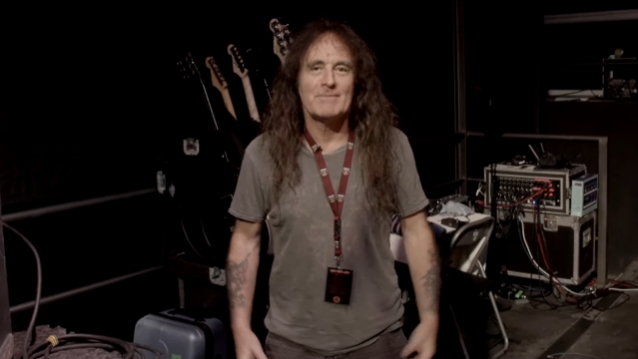 BRITISH LION, the side project of IRON MAIDEN bassist and founder Steve Harris, has shared a video recap of the band's recently completed summer 2022 European tour. You can now watch the five-minute clip below.

Asked by the Tampa Bay Times what the itch is that BRITISH LION scratches that he doesn't get in his job with MAIDEN, Harris said: "I suppose playing small clubs and being close and personal with the audience. I love playing big places as well. I enjoy them all, and I'm very lucky that I can do them all. But also, it's clubs that I never played with MAIDEN, even in Europe. There's a famous club called the Milky Way in Amsterdam, which I managed to play with BRITISH LION, but I never did that with MAIDEN. There's places that I'm playing on [the U.S.] tour that I've never played before. So it's all new ground. It's a challenge. It's nice. I like a challenge."

In a 2020 interview with Bass Player magazine, Harris said that he loves playing small clubs. "I'm very lucky that I can play all types of gigs; massive gigs and small ones as well," he said. "It's a change. I'm not trying to conquer the world with this band; there's not enough years left in me to do that anyway."

Asked if the different venues present a different set of challenges, Steve said: "I actually think it should be the same, whether you're playing for 200 or 200,000 people, you know. To me, there's no difference. You still give 110 percent wherever you're playing. We had one gig where the promoter just didn't do [anything]. I think we had, like, 95 people in there, but it was still a great gig, one of the best of the tour. It doesn't matter. We're still going for it, and I was proud that we went out there. It was fantastic."