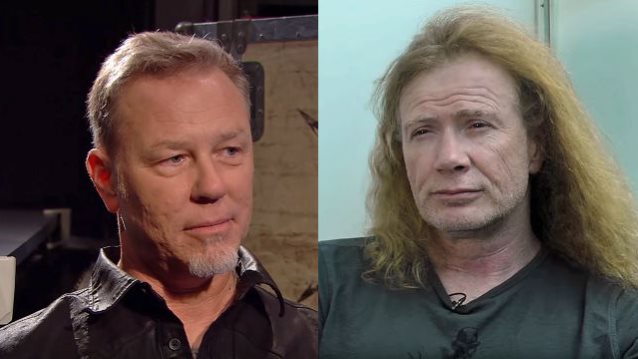 METALLICA Frontman On Relationship With DAVE MUSTAINE: There's No Reason For Things To Not Be Good

In a brand new interview with the "WTF With Marc Maron" podcast, METALLICA frontman James Hetfield spoke about the importance of reconnecting with MEGADETH, ANTHRAX and SLAYER — the other members of the so-called "Big Four" of 1980s thrash metal — for a run of dates in 2010 and 2011.

"It really started [when METALLICA was inducted into] the Rock And Roll Hall Of Fame [in 2009]," Hetfield said (hear audio below). Getting nostalgic and thinking, 'My God, look at all the people that have helped us along the way, and look who are still around. Let's say 'thank you' to them.' And so the 'Big Four' was kind of that thing. We're all still playing after thirty… whatever it was… thirty-two years. Let's go do a gig together. I mean, why shouldn't we? Let's celebrate the fact that we're still alive and playing music that we love. And I think the other thing was, the New Wave Of British Heavy Metal. That's all I ever hear about. NWOBHM. Blah blah blah. What about the 'Big Four'? No one knows the 'Big Four'. Come on, let's make it known. Let's make some history here, and let people know, and put a mark there that, hey, the 'Big Four' was, and is, a force to be reckoned with."

Hetfield also talked about his relationship with MEGADETH frontman Dave Mustaine, who was a member of METALLICA for less than two years, from 1982 to 1983, before being dismissed and replaced by Kirk Hammett.

"There's no reason [for things] to not be good [between us]," Hetfield said. "At this point, we've all freakin' fell off the wagon, we've all gone into the ditch, we've all gotten back on track, we've all learned from our stuff. And at the end of the day, it's just journeys — everyone is doing a different journey — and why would you hold a grudge with someone or vice versa?"

James credited his emotional maturity for being able to focus on making amends and repairing relationships with current and former bandmates — something he never would have been able to do in the early part of METALLICA's career.

"I've seen some kind of light around that," he explained. "Because I think [inducting BLACK SABBATH into the] Rock And Roll Hall Of Fame [in 2006] was a part of that realization that… You know, when we were up there and seeing… Ozzy [Osbourne] is sitting at one table, and the rest of BLACK SABBATH at the other table, and they don't wanna jam together, and they're being inducted into the Rock And Roll Hall Of Fame. So we go up and we play a song — we played BLACK SABBATH songs for them— and that was beautiful for us, but it was sad to see that."

He continued: "I'd rather see you guys play. Whatever it is, put it away, please. I get it — I get it's hard to get past stuff — but there's stuff in my life that I thought I could never get over. Just see past that shit, go 'big picture,' whatever it is you need to do, [and] you can get past the most unbelievable places that you think you can never get out of."

METALLICA will head out on a major world tour in support of the set later this year, with North American dates rumored to begin in late spring.