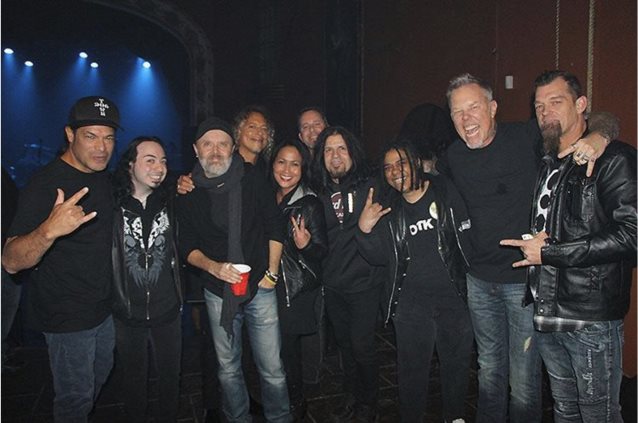 Earlier this week, the members of METALLICA got a chance to hang out with SANDMAN, a Canadian tribute band that received a cease-and-desist letter from METALLICA's attorney over the use of their name and logo to publicize SANDMAN's shows. The meeting took place in Toronto, where METALLICA played a special intimate club show Tuesday night (November 29),with all proceeds going to the Daily Bread Food Bank.

Back in January, METALLICA apologized to SANDMAN, explaining in a statement: "We hear that a Canadian METALLICA tribute band is a little upset with us and with a little digging figured out why. It turns out that a certain letter was delivered to the band SANDMAN that neither we nor our management were aware of until it surfaced online… It turns out that we have a very overzealous attorney who sent this letter without our knowledge."

METALLICA's statement continued: "We have a long history of not only enjoying tribute bands, but we started as one. Heck, we even recorded a two-disc album of covers! We will always remember those days and continue to enjoy tribute bands, even inviting them to support us on various tours over the years."

They added: "SANDMAN should file the letter in the trash. We've spoken to Joe Di Taranto of the band and it's all good. Keep doing what you're doing… we totally support you! And in the meantime, our attorney can be found at SFO catching a flight to go permanently ice fishing in Alaska."

Di Taranto told RollingStone.com that METALLICA drummer Lars Ulrich called him to personally apologize, saying: "He gave me and the band his full blessing to continue on as we were... We will continue to fly the METALLICA flag, loud and proud!!"

METALLICA has clashed with other parties over infringement issues before, and did pursue legal action. In January 1999, the band sued Victoria's Secret after it sold a lipstick line dubbed "Metallica." Then in 2000, METALLICA launched a trademark infringement suit over a perfume called "Metallica," which retailer Neiman Marcus was selling in its stores. Both cases were later settled.