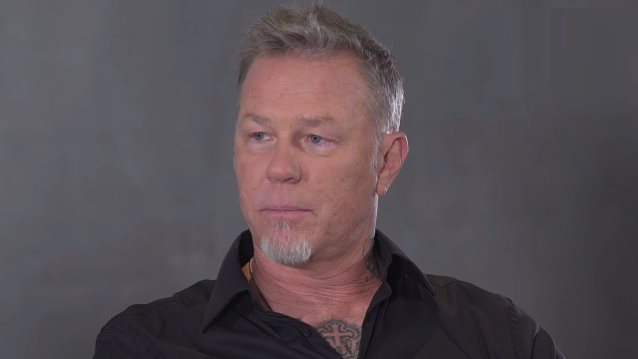 METALLICA's JAMES HETFIELD: 'I Believe In A Higher Power'

France's Clique recently conducted an interview with METALLICA frontman James Hetfield. You can now watch the chat below. A couple of excerpts follow (transcribed by BLABBERMOUTH.NET).

On whether he believes in God:

James: "I believe in a higher power, yes. I don't know… he, she, it… whatever… I see it everywhere. It is everything to me. And if I choose to see it, it makes me feel better. If I think I can do better [laughs], it never works. [Laughs]"

On whether this "higher power" has saved him in his life:

James: "I believe so. I believe that a higher power, whatever it may be… Sometimes I think it's… 'Oh, it's my father coming back to help me,' or my mother, or somebody, or Cliff [Burton, late METALLICA bassist]. It's all one anyway. So if I choose to see it… It shows up in my wife a lot. She will say, 'What are you doing? Don't do that.' That used to make me angry. 'Don't tell me what to do.' But, okay, I understand that something is here helping me. Something is saying… If I choose to hear it, then I choose to hear it. Sometimes I don't. But it's everywhere."

On dealing with the negative aspects of fame:

James: "For me, I never… I don't understand gossip. It's never been important to me. My wife loves looking at the People magazine. 'Oooh, look who's dating who.' And I don't care. But to some people, it's important, and I don't know why. I think they just see themselves in other people, or wish, or they're dreaming, or they're mentors or something. I don't know. For me, I think when people follow me down the street or something, I understand what they might be looking for, but I'm not it. I mean, I'm just someone who gets to play music and has found my path. What I think is they expect something — they expect something, whether it's an autograph or a picture or something. It's like they want something. And I wanna shake their hand, I wanna say hello, I wanna talk with them, and it's not good enough for them. I don't understand that. Gosh, METALLICA, we've been together since we were nineteen years old, so I don't remember so much what it was like to just go to a concert and sit on the grass and enjoy it and not have someone come up and ask for something. So it's a part of my life, and I see that people want, they're in need of something. They look up to you, or they invest — they invest a part of themselves in you, and when you disappoint them, they don't know what to do. It's difficult. So alls I can do is be me. I can't be everything for everyone. It's not fair to myself."

As previously reported, METALLICA will perform at the 59th annual Grammy Awards, set to take place on February 12 at the Staples Center in Los Angeles, California. The ceremony will be televised at 8:00 p.m. on CBS. The band is nominated this year in the "Best Rock Song" category for the track "Hardwired", from its latest album, "Hardwired… To Self-Destruct".

METALLICA's nomination for "Best Rock Song" this year was a surprise since the band is not included in the "Best Metal Performance" category.

Guitarist Kirk Hammett told Billboard: "We've had such a crazy relationship with the Grammys, so when the Grammys do something like this we kind of like throw our arms in the air — 'Whatever. Whatever!' But it's still an honor. It's still great to be recognized by the academy, and it's still fun to play the Grammys when we're asked."