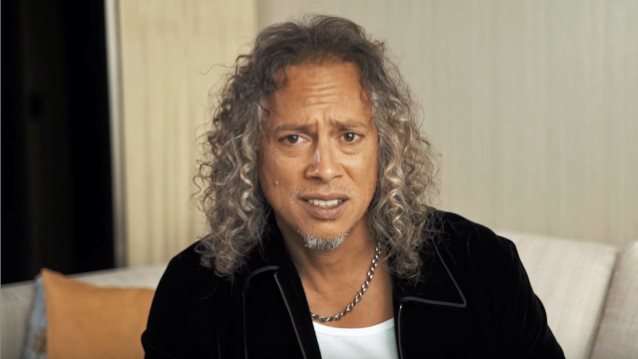 In a brand new interview with the "Mike On Much" podcast, METALLICA guitarist Kirk Hammett spoke about how the lyrical themes covered on the band's new album, "Hardwired… To Self-Destruct", relate to what's going on in the world right now, especially with the recent U.S. presidential election.

He said (hear audio below): "Well, I've gotta tell you our album came at the right time, because, you know, with that big shake-up that happened November 8th, and then our album coming out November 18th… I'm a little happy for the fact that at least our album came out and we can bring some sort of solace to some people out there who are really upset or disappointed. And that's fine.

"For me, I'm a guy who's always angry — my anger is just always under the surface — and it just manifests in the weirdest, craziest, strangest ways. It's something that I've had to deal with all my life. And so with things like… the election comes up, and it's so weird and it's so divisive. I have to check myself and check my own anger and [tell myself that] it's not something that's gonna change my life completely. I really have to check it and just make sure that my anger doesn't just send me off into an unhealthy space."

Hammett continued: "The situation with the politics in American right now, and in Britain, it's weird — it's almost like it has to happen to give people a bit of perspective on how things could be a lot worse for us.

"But as far as that's concerned, I don't know what the fuck's gonna happen. I need to be optimistic about it, but I'm gonna wait and watch and pay attention, for sure."

The guitarist went on to name The New York Times, The Huffington Post, The Daily Beast and Washington Post as some of the sites that he regularly gets his news from. He explained: "To me, it's important to not go to just one site. It's important to go to different sites and get a lot of different perspectives."

Hammett last month spoke out publicly on political matters for the first time, breaking from METALLICA's long-standing policy of not getting involved in issues that could be considered divisive.

"The thing is, METALLICA appeals to such a wide range of people," Hammett explained. "We have people on the left, people on the right, in droves. Part of the reason why we don't consider ourselves a politically oriented band is because when you start talking about politics you draw a line in the sand, and all of a sudden [there's] division, and that's not what we want. We want everyone to be in this together, experiencing the music together. We see politics as a completely different thing. It's like music and NASCAR racing, that's how different politics are to METALLICA."

Acknowledging that music has the power to reach people and change their minds, especially young fans that hang on their favorite artists' every word, Hammett said: "That's why I've chosen my words carefully, that I — not METALLICA, but I — will take it upon myself to get involved, if there is something I see that is seriously wrong, and I really feel that it's my job to say something, and to call out people who need to be called out. I believe in fairness. I believe in equal ground for everyone. I believe in equal opportunity and I believe that everyone is equal. That guy [Trump] doesn't even believe in that! He does not believe that everyone is equal."

METALLICA drummer Lars Ulrich, who has made no secret of his liberal views, said in a recent interview with Vulture that he has never "willfully had a political conversation with" frontman James Hetfield, who has described himself as being somewhat conservative politically. Ulrich explained: "The thing you've got to understand is that METALLICA is made up of four people from four different places who took four very different paths to where we are now. The one thing that unites us is the love of the music that we're playing and that all four of us felt like outsiders trying to figure out who the hell we were. We didn't come together because we were questioning this in the culture or that about politics. We came together because we were all a little lost and trying to get a sense of belonging to something bigger than ourselves. I'll sit and talk politics with you all night, but I don't necessarily feel the need to do it in an interview. METALLICA is a collective, but we've just never been the kind of band to sit down and say, 'Okay, what's our common view of the world?'"

Ulrich made headlines in October when he said that he would consider returning to his native Denmark if Donald Trump won the election.

Hetfield told BBC 6 Music that METALLICA stays away from topics like politics or religion in its music because "that just seems to polarize people even more. We all have our own beliefs, but at the end of the day, we're trying to connect with people and it seems like political views don't do that as much as music does."