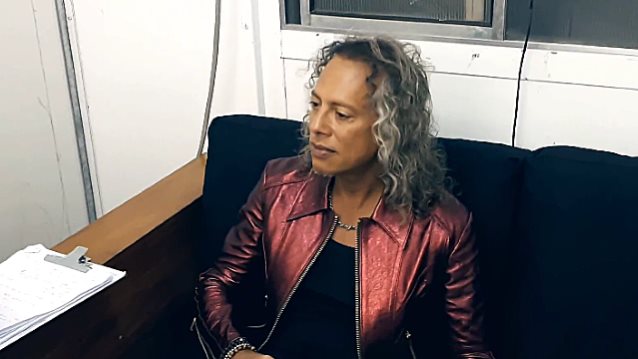 Kirk Hammett says that it's "highly unlikely" that Donald Trump will be a two-term president.

Asked by the Brazilian radio station 89FM A Rádio Rock at last month's Lollapalooza Brasil festival if he thinks the United States Of America will change now that Donald Trump is in the White House, the METALLICA guitarist said (see video below): "Well, you know, it's gonna be a very interesting four years. But everyone has to remember — it's just gonna be four years. It's highly unlikely that it's gonna be eight. I'm not a prophet, but that's what I think. But, you know, I think we're gonna be in for a pretty interesting ride, and we'll see what happens at the end."

Both Hammett and METALLICA drummer Lars Ulrich have voiced their dislike of Trump to different degrees, unusual for a band whose members have never spoken out much on politics.

After Trump — one of the most polarizing figures to assume the office — was officially sworn in as the 45th president of the United States on January 20, a number of celebrities took to social media to share their thoughts, including Hammett, who urged fans to "defend democracy" and "reject American carnage."

In a series of tweets, the METALLICA guitarist was critical of Trump's inaugural address, which painted a bleak picture of life for some in the United States. "To say America is not great, that it lacks greatness, sets up a scenario for manipulation and control from others —pay attention, people!" Hammett wrote.

Asked if he thinks the United States under Donald Trump is a "new America," METALLICA frontman James Hetfield told Claudio Vergara of the Chilean newspaper La Tercera: "It's always a new America when someone comes in. But it's about balance. You have far left, far right, and it goes back and forth to keep it balanced. In the middle is the best, we know that. In the middle… accepting everything, understanding everything. But it's not like that. People aren't like that. Humans aren't like that."