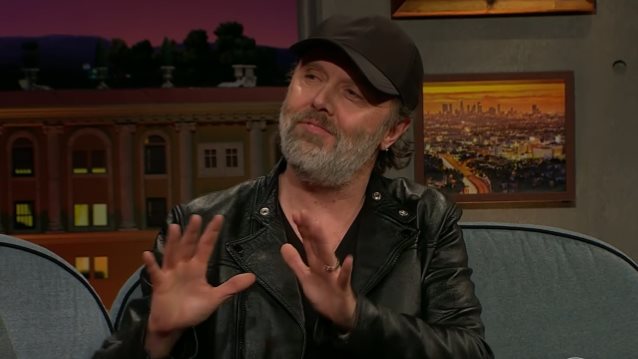 Lars Ulrich says that James Hetfield was "livid" over the technical problems that left the METALLICA frontman without a mic for the bulk of the band's collaboration with pop giant Lady Gaga at this past weekend's Grammy Awards.

The performance on Sunday night's (February 12) awards show was marred by the incident, which was reportedly caused by a stagehand accidentally unplugging Hetfield's mic.

That forced the frontman to share Gaga's mic for almost the rest of the song. A visibly Hetfield knocked down his mic stand at the end of the performance and threw his guitar offstage.

During an appearance on last night's episode of "The Late Late Show With James Corden" on CBS, Ulrich stated about the mishap (see video below): "In the heat of the battle, you're out there and you're playing, when it's a technical issue, you don't really know — 'Is it going to the house?' 'Is his vocals going to the truck? 'Maybe it's just the monitors.' — so you've just gotta keep playing. We get off stage, we get back there, and I haven't seen [James] like that in twenty years. I mean, he was livid. He's aged really well and he's a pretty chill guy, but the first five or ten minutes in that dressing room was not a lot of fun. But, like they say, the show must go on, and we fought through it. And with the fire and Gaga in my lap for about a minute at one point, it was just, 'Keep going, keep going, keep going.' So we fought through it, and a lot of people said that at least it made for great television, which is really the point of doing the Grammys to begin with."

Ulrich told Rolling Stone that METALLICA's collaboration with Gaga may end up being just the beginning for the unlikely combo. Ulrich explained: "We already started fast-forwarding to the next chapter when we can do more of this. It's not one of those '20 lawyers, strategists and managers trying to force two people from two different worlds to figure out how to spend four minutes together on a national telecast.' Of any of these undertakings, this is about as organic and authentic as there's ever been one. We're just getting started."

Ulrich added that Gaga was the "quintessential perfect fifth member of this band," saying, "Her voice, her attitude, her outlook on everything is so awesome. [The performance] was so effortless and organic and she just has the spirit of hard rock and metal flowing through her veins. It comes really easy for her. There's nothing contrived; she just has this super-warm, easy energy."

METALLICA and Gaga may not be able to get together for an encore anytime soon, as both are heading out on world tours. METALLICA announced on Monday (February 13) the details of the North American leg of its "WorldWired" 2017 tour in support of the band's new album, "Hardwired... To Self-Destruct".

The trek kicks off on May 10 in Baltimore, Maryland and will hit stadiums in 25 cities before winding down in mid-August. Support will come mainly from AVENGED SEVENFOLD and VOLBEAT, with GOJIRA taking over for the latter group for the last six shows.