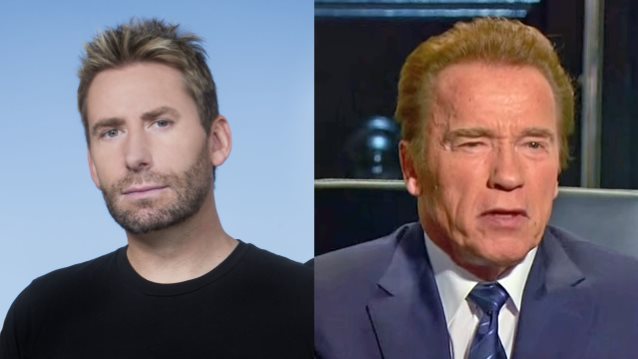 NICKELBACK Takes On ARNOLD SCHWARZENEGGER In Twitter Feud Of The Day

Former Gov. Arnold Schwarzenegger has become the latest person to jump aboard the NICKELBACK bashing bandwagon.

Noting the deep unpopularity of members of Congress as he pushed for redistricting reform across the nation, Schwarzenegger said in a video posted on attn:, a video sharing site aimed at millennials: "Here are some of the things that are more popular than Congress: hemorrhoids, NICKELBACK, traffic jams, root canals, colonoscopies, herpes. Even herpes, they couldn't beat herpes in the polls."

The former governor, who championed redistricting reform in California, also tweeted: "When Congress is less popular than herpes & Nickelback, how do 97% of them get re-elected? Gerrymandering."

Unsurprisingly, the band everyone loves to crap on noticed and fired back with chilly precision, citing the critically savaged 1997 superhero movie "Batman & Robin", which features Schwarzenegger as Mr. Freeze. The movie has a Rotten Tomatoes rating of 11 percent, and a 3.7 out of 10 on IMDB. The band tweeted: "Approval rate this: Batman & Robin. Please leave us out of your future wisdom drops. Danke Shön Herr Governator."

Conceding that he had been trumped by the Canadian rockers, Schwarzenegger retorted: "That's... ice cold. I hope we can agree that we need a freeze on gerrymandering, guys. Thanks for the reply."

NICKELBACK recently announced that its new single and album are both called "Feed The Machine", with the band gearing up for a lengthy North American tour this summer to support them. The trek kicks off on June 23 in Noblesville, Indiana and hits 44 cities before winding down on October 1 in Vancouver. DAUGHTRY will appear at all the U.S. shows, while SHAMAN'S HARVEST will do the entire tour and CHEAP TRICK will serve as special guests on the western Canadian leg.

Our Congress is less popular than herpes. -- Arnold Schwarzenegger