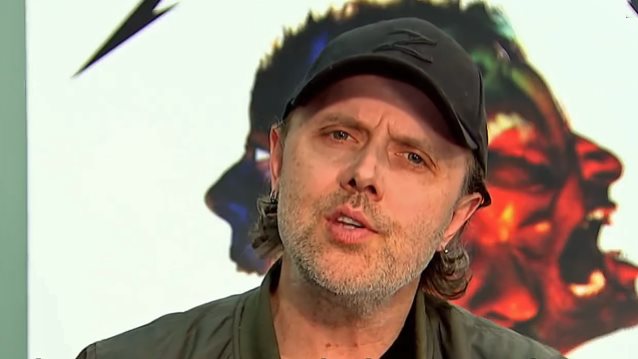 METALLICA drummer Lars Ulrich has slammed President Donald Trump's plan to build "a great wall" along the U.S.-Mexico border, saying that "we need to bring people together."

Days after being sworn in, Trump issued an executive order to build a wall on the southern border, later explaining that it will be "a very effective weapon against drugs and crime." His vow to make Mexico pay for the wall — estimated to cost up to $20 billion — has stirred resentment there, where the country's leader has repeatedly said there will be no such payment.

METALLICA concluded a three-night residency in Mexico City Sunday night (March 5),and Ulrich was asked by Paola Rojas of Mexico's Las Estrellas television network for his opinion on the proposed wall. The drummer responded (see video below): "I don't think the world needs any walls. I think we need to bring people together. METALLICA travels all over the world, and through music we try to bring people together. So whether we're in Mexico or whether we're in Asia or whether we're in Europe or whatever, we encourage as many different people from as many different backgrounds to come together and share music and life and culture and all these experiences. And so, being one Danish guy, being asked an opinion, I don't think any walls are necessary, and I think that, increasingly, as far as METALLICA traveling all over this beautiful planet, we break down barriers with music."

After Trump — one of the most polarizing figures to assume the office — was officially sworn in as the 45th president of the United States on January 20, a number of celebrities took to social media to share their thoughts, including METALLICA guitarist Kirk Hammett, who urged fans to "defend democracy" and "reject American carnage."

In a series of tweets, the METALLICA guitarist was critical of Trump's inaugural address, which painted a bleak picture of life for some in the United States. "To say America is not great, that it lacks greatness, sets up a scenario for manipulation and control from others —pay attention, people!" Hammett wrote.

In October, Ulrich said he would consider moving back to his native Denmark if Trump were elected president.

"I am a hundred percent Danish citizen. I pay taxes in the U.S.A., but I can't vote in America," he said. "Yes, certainly sometimes I think about moving home to Denmark… If Trump becomes President and everything goes to shit, I might make my way to the airport and ask if I can get back in again."