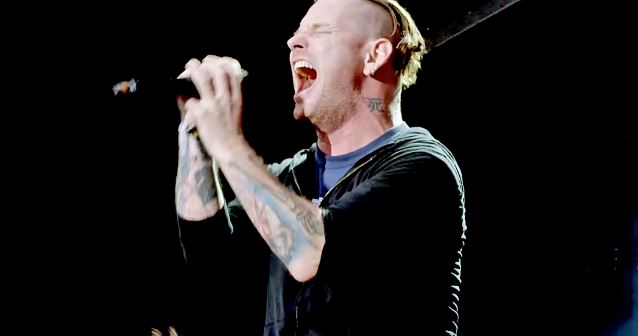 SLIPKNOT and STONE SOUR frontman Corey Taylor joined KORN on stage on Sunday night (March 5) at the House of Blues in Anaheim, California to perform the KORN song "A Different World". Fan-filmed video footage of his appearance can be seen below.

"A Different World" is taken from KORN's latest album, "The Serenity Of Suffering", which came out last October.

KORN singer Jonathan Davis spoke about getting Taylor to appear on the track. "We were trying to figure out who we wanted to collaborate with, and I'm like, 'You know, that's the one, that's the guy,'" he said. "And I texted him, I'm like, 'Do you want to be on a new KORN track?' He's all, 'Hell yeah! When and where, what do I do?' So he did great on the song. I already did my parts, I'm like, 'Do what you do, man.' And I like the way he did it, the approach: he starts creeping in underneath the song, you can start slowly hearing his voice under mine, and it crescendos up into the middle part where he sings, and then it's just full-on at the end, so the song came out great."

Taylor said that he became involved in "A Different World" after receiving "a phone call, like, 'Hey, do you wanna do this?' And I was on the plane the next day. I flew in, and I hadn't even heard the music. I was, like, 'Yeah.' 'Cause as a fan and as a friend, it was just something that we had been talking about for years. And all the stars aligned and I got to do this track. And it is heavy, dude. It is so righteous. People are gonna lose their minds."

KORN and STONE SOUR will join forces for a summer tour, set to get underway June 16 at the USANA Amphitheatre in Salt Lake City, Utah and then continue through early August. Presented by Live Nation, "The Serenity Of Summer" tour will be rounded out by support from Japan's female-fronted BABYMETAL, southern rapper YELAWOLF and ISLANDER (June 16-25),followed by a second leg (July 19 - August 2) which will see KORN joined by SKILLET, YELAWOLF and DED, creating a versatile bill reminiscent of KORN's famed "Family Values" tours in the past.