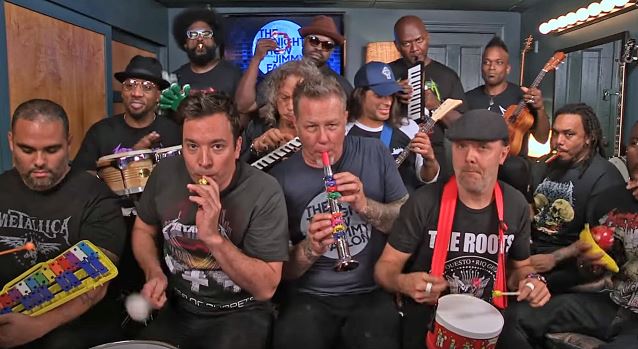 METALLICA performed its classic song "Enter Sandman" using children's musical instruments during an appearance on last night's edition of "The Tonight Show Starring Jimmy Fallon". They were joined by the house band THE ROOTS and host Fallon.

As you read this, METALLICA is in the midst of releasing music videos for every song on its new album, "Hardwired... To Self-Destruct". Half the clips emerged every two hours on Wednesday (November 16),starting with "Dream No More" at noon ET, while the rest are expected to arrive at the same rate on Thursday (November 17).

The clips will finish premiering just as the clock hits midnight Friday (November 18) in New Zealand, when the new album will be officially available worldwide. Drummer Lars Ulrich told The Pulse Of Radio that METALLICA didn't have a plan in mind when they began to write the album. "There wasn't really any sort of sitdown powwows or talks or battle cries — I mean, it wasn't like here's the big kind of blueprint," he said. "We just started making music and writing songs. There was no big band meetings about 'what's the direction of the record' or any of that kind of stuff. It just sort of happened organically, really."

The videos were all filmed around the globe with various directors, with each one debuting through a different website or media outlet.

The clips that premiered on Wednesday were "Dream No More", "Confusion", "ManUNkind", "Now That We're Dead", "Here Comes Revenge" and "Am I Savage". Videos debuting on Thursday include "Halo On Fire", "Murder One", "Spit Out The Bone" and the bonus track "Lords Of Summer".

The new clips follow the previously released videos for "Hardwired", "Moth Into Flame" and "Atlas, Rise!"

"Hardwired... To Self-Destruct" arrives on Friday as a double album featuring 12 songs and 80 minutes of music.