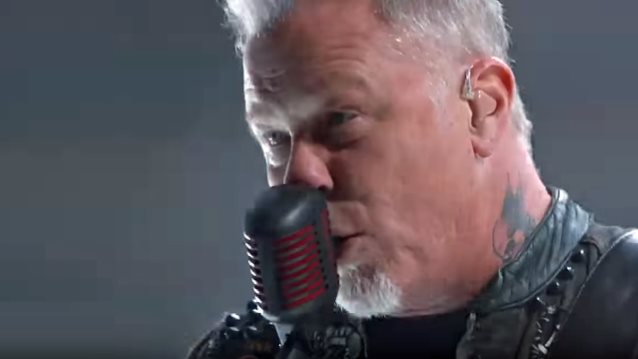 METALLICA was the musical guest on last night's (Wednesday, December 14) episode of "Jimmy Kimmel Live!" The band played six songs on the show's outdoor stage in front of a standing-room-only crowd: "Atlas, Rise!", "For Whom The Bell Tolls", "One", "Master Of Puppets", "Creeping Death" and "Enter Sandman". Check out video footage of the two televised tracks below.

In addition to performing on the show, the members of METALLICA took on a superfan in a quiz about the band, discussed their new album, "Hardwired... To Self-Destruct", and how their iconic band logo was created.

As previously reported, METALLICA will play a special intimate show tonight (Thursday, December 15) at the Fonda Theater in Hollywood, California.

All proceeds from the sale of tickets to this show will be donated to Los Angeles Regional Food Bank. Fans are also encouraged to bring canned foods and non-perishable items to the show for donation as well. METALLICA just played a similar show in Toronto, with proceeds also going to a food bank in that city.

"Hardwired… To Self-Destruct" debuted as expected at No. 1 on The Billboard 200 album chart on November 27, selling 291,000 copies in its first week of release.