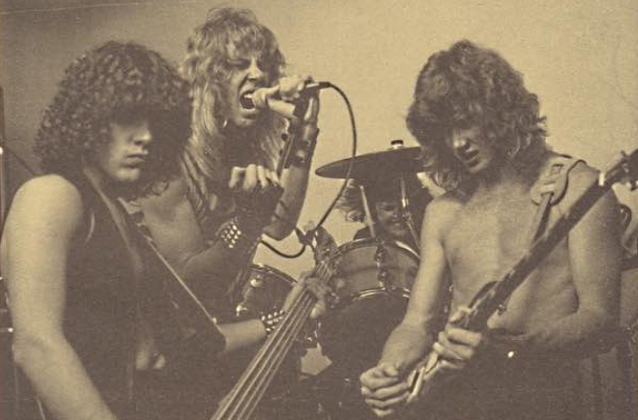 Earlier today (Monday, March 14),METALLICA celebrated the 40th anniversary of the band's first-ever concert by sharing an early flyer promoting the gig. METALLICA also included the setlist for the show, which took place at Radio City in Anaheim, California. The group played mostly covers, charged $15 for people to see the performance and drew 75 people.

The Radio City concert was held just months before METALLICA made its recording debut on the first "Metal Massacre" compilation (on which they were credited as METTALLICA) — and featured METALLICA's then-lineup of James Hetfield on vocals, Dave Mustaine on guitar, Ron McGovney on bass and Lars Ulrich on drums.

METALLICA's set included only two original tunes — "Hit The Lights" and "Jump In The Fire" — and was filled out by cover versions of SAVAGE's "Let It Loose", BLITZKRIEG's "Blitzkrieg", SWEET SAVAGE's "Killing Time" and four DIAMOND HEAD songs. At the time of the gig, Hetfield had not yet started playing rhythm guitar while singing, leaving Mustaine as the sole guitarist in the band.

Three years ago, Ulrich commemorated the 37th anniversary of the Radio City concert by noting on Instagram that METALLICA played "almost all NWOBHM covers" at the show, "most of which ended up being recorded later along the way and showing up on various 'Garage' releases."

Hetfield spoke about METALLICA's first show during an interview with the U.K. magazine Kerrang! He said: "The first gig was at Radio City, and I was just singing. There were a lot of people there, maybe 200, because we had all my school friends and all Lars's and Ron's and Dave's buddies. I was really nervous and a little uncomfortable without a guitar, and then during the first song, Dave broke a string. It seemed to take him eternity to change it and I was standing there really embarrassed. We were really disappointed afterwards. But there were never as many people at the following shows as there were at that first one."

This incarnation of the band recorded several demos, including the legendary "No Life 'Til Leather" and "Power Metal" tapes. McGovney was replaced by Cliff Burton by the end of 1982, and Mustaine was dismissed in April 1983 before being replaced by EXODUS guitarist Kirk Hammett.

37 years ago today, March 14 ’82, the ‘Tallica played our first live show ever at a joint called Radio City in Anaheim, California. As you can tell from the notes in my diary, it was my first gig ever and I was “very nervous.”(!) Additionally, you eagle-eyed observers may notice that there’s not a lot of ‘Tallica originals being performed here at the first outing, but almost all NWOBHM covers, most of which ended up being recorded later along the way and showing up on various Garage releases… Here for your viewing pleasure is a picture of your Danish drummer from later in ’82 still playing my first Camco kit (there are no pictures that exist from the first gig),the OG flyer, the setlist in my handwriting and a page from my diary describing the antics of the evening! Happy Live Debut Anniversary! Who would’ve thought....🤪 #wanna #tbt 📸 by @umlaut