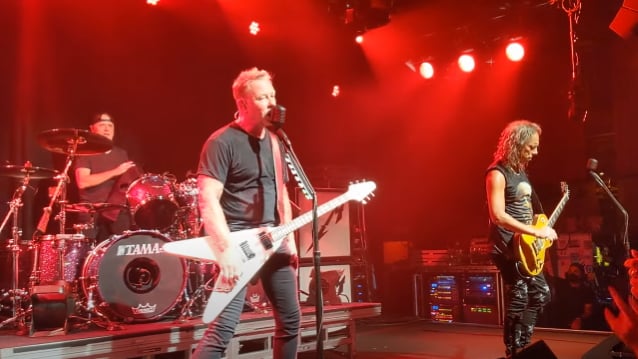 Video footage and photos of the concert can be seen below.

The heavy metal giants, who are celebrating the 30th anniversary of their mega-selling self-titled album, shared the news of the last-minute gig via social media on Thursday. They wrote: "Hey! Gonna let you in on a little secret .. We're playing tonight at The Independent in downtown SF. Grab a $20 bill and get your ass to the box office right now! Proof of vaxx is required to get a wristband and it's gonna sell out fast. One ticket per person, cash only!"

Prior to Thursday, the band's last hometown performance was in September 2019, when it played with the San Francisco Symphony at the grand opening concert at the home of the Golden State Warriors.

A remastered edition of the self-titled LP, commonly known as the "Black Album", is now available on CD, vinyl or as a deluxe box set. The remaster is accompanied by "The Metallica Blacklist", a collection of 53 artists covering the Black Album's dozen tracks, with all profits from the release split evenly between METALLICA's All Within My Hands Foundation and more than 50 other charities chosen by the artists taking part in the project.

Last Friday, METALLICA appeared on "Jimmy Kimmel Live!" to promote the 30th-anniversary box set edition of "The Black Album." The band performed two songs, sat down for an interview and took part in a "Celebrities Read Mean Tweets"-style segment where the four members of the group read one-star Amazon reviews of the classic 1991 album. A day earlier, METALLICA and pop star Miley Cyrus performed "Nothing Else Matters" live on "The Howard Stern Show".

One more view of #Metallica playing a surprise show at the Independent in SF. @nbcbayareapic.twitter.com/7X0iZWsBIc

.@Metallica has taken the stage at The Independent ‼️‼️ pic.twitter.com/ACI3UMtzdH

This is why I love San Francisco. So I live three minutes away from one of the most famous venues in the city, The Independent. I get a tweet saying head there now with 20 bucks. Three minutes later, I’m in line to see a secret show with Metallica for 20 bucks. pic.twitter.com/6JJPHHuy0v

Feels like old times at The Independent in SF. A surprise concert! Metallica is playing a 40 year anniversary show. Tickets are long gone. People can start lining up at 6:30. @nbcbayareapic.twitter.com/SngONS1hkR