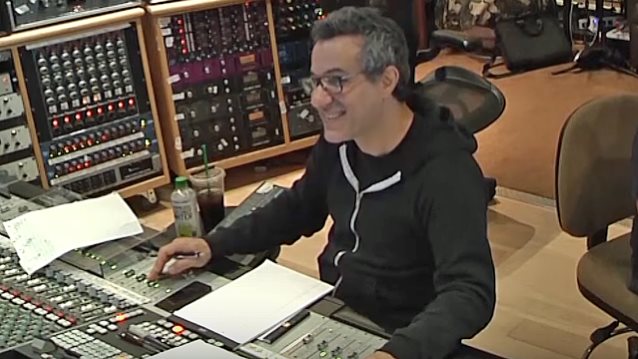 Producer Greg Fidelman recently spoke to Soundworks Collection about his work on METALLICA's latest album, "Hardwired… To Self-Destruct". You can now listen to the chat using the SoundCloud widget below. A few excerpts follow (transcribed by BLABBERMOUTH.NET).

On how he met METALLICA:

Greg: "[I met] METALLICA on the 'Death Magnetic' project. I'd been engineering a lot of records for Rick [Rubin] at that time, [around] 2008. And this was on the heels of the first SLIPKNOT record that I worked on with Rick, which was… When was that? In 2003 or 2004, I guess — the 'Vol. 3: The Subliminal Verses' record. I think the [METALLICA] guys were fans of that record, so when they wanted to work with Rick, I think they were also hip on working with me and Rick. So that's how I sort of got invited in. And it all was a bit of a whirlwind. I mean, Rick had already been doing pre-pro with them. I kind of came in at the very tail of pre-production. I met them [in their headquarters in San Rafael, California]. I came up for two days, for two quick rehearsals, then I went back to L.A. and two weeks later, they showed up in L.A. and we started tracking. So there was no dating period. [Laughs] We just kind of went for it."

On how his relationship with METALLICA evolved over the years:

Greg: "We got along, I would say, pretty much from the onset. But with established bands that have been around for a long time like that, I don't think you get put into the fold super fast. But that record took a while, and I slowly but surely got the trust of the guys. We had a lot of fun. Rick is a producer that likes to not be there for every note of every song, so there was a lot of time where it was me and them, and I think there's where we sort of developed [our relationship]. I guess it's not surprising, but I wouldn't have known before then… I mean, they're maybe a couple of years older than me — not much. We have very similar… sort of similar backgrounds. Certainly similar… The music that got them excited… I mean, Lars [Ulrich, METALLICA drums] had some European experiences that are unique, but me and James [Hetfield, METALLICA frontman], and me and Kirk [Hammett, METALLICA guitarist] especially, just stuff that I listened to when I was in high school is the exact same stuff… So when they've got these weird, sometimes rare references, like, 'Oh, yeah. I remember that record. That was awesome,' we could sort of bond that way too. And then from being a guitar player in a band — obviously not a band the level of METALLICA — but just being in a van, going across the country a bunch of times and doing that also made it a little more comfortable for us to hang out and trust each other."

On how the writing process was similar and different this time around:

Greg: "This record, I think, is a little bit more… the overall creative stuff is a little bit more specific James and Lars, the two of them. Not that they shut people out, but that's just the way it sort of went. So I think that's a little bit different than the last few records. But I don't know… There was sort of like a lack of marching orders, for lack of a better word, although I think those words had been used several times in the conversations I had with them. There was sort of a freeness of it — it didn't have to be progressive or overcomplicated; it didn't have to be super simple, AC/DC-ified, or whatever you wanna call it. It could just be whatever it was and whatever we thought it needed to be. I think there was a little more friendly collaborating on this. There certainly was moments of not friendly collaborating. [Laughs] But I think it was a healthy [process]… maybe a little healthier as far as bouncing ideas off each other when it comes to… sort of everyone combined."

On how he avoids getting sick of songs after working on them for so long:

Greg: "I think anyone in this business has a strange knack to be able to listen to something over and over… I don't think that you can make it if you don't… If you go crazy after ten listens, I think [it's not for you]. But I don't know… For me, lots of things were unique about this record, but one thing that stands out is… Obviously, you work on stuff and you're hoping things are constantly getting better. But this record did that, and then in the ninth inning — to make a sports metaphor here — a lot of stuff got a lot better. It was really late. Stuff was kind of already… You thought that's how it went, and you were sort of getting comfortable with it… You always thought maybe it could have been better… I mean, I feel that way about almost every record. There's a song called 'Spit Out The Bone'… I mean, there's several songs. 'Spit Out The Bone' got a lot better really, really [late]… Maybe that was the last one… I'd already been mixing most of the record, and I re-did the bass in the front third and back quarter of the song, in the verse-chorus area. Rob [Trujillo, bass] agreed [to re-do] the bass. It's one of the earlier ones we did, and I had just mixed the song 'Hardwired' or something, which is also… they're similar in that they're both kind of fast and the bass is trying to play in there with the guitar. But on the song 'Hardwired', we did something where he latched with the bass drum a little bit more than the guitar. And I thought on 'Spit Out The Bone', [which was a] similar fast thing… [I said] 'I think if you did this, it's gonna make the song feel faster.' And it did. It was awesome. So little things like that. And James also re-sang the verses of that song. Literally ten of the twelve songs were mixed, and we went out and did vocals on two songs. 'Now That We're Dead' he made better, especially the back quarter of the song, and the verses of that song got a lot better."

Greg: "Lars is definitely one of the more hands-on… I don't know if that's the right word, but… He's focused, he's got his hands in all the pies that make the record go — more than most drummers. He's a songwriter, he's an arranger, works on all aspects of the song. He even helps with solos, which is a whole another story. But I think why me and Lars work well together — and I hope he would agree with this — [is] we have similar tastes. Maybe ten times out of ten thousand on this record was I passionate about something that he hated and vice versa. 'I love that fill,' and I'd be, like, 'I think if I hear that fill one more time, I'm quitting.' It's very rare that it happened. He's a really great person to collaborate with. I try to be pushy to the point of constructive… Sometimes you have to get to the point to where it's an argument, and I understand there's value in that, but there's also a lot of unvaluable arguments, so I try to avoid that. But it's great, actually, to have a guy playing the drums that's as in tune with the song as opposed to [just] the drum parts."

"Hardwired... To Self-Destruct" came out in November. The effort consists of two discs, containing a dozen songs and nearly 80 minutes of music.