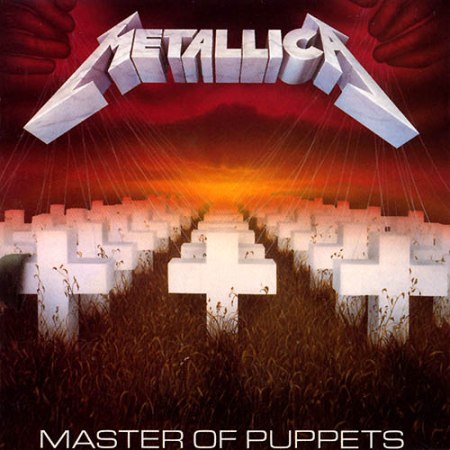 METALLICA's 1986 LP "Master of Puppets" has been named the "best heavy metal album of all time" in a poll for musicians' web site MusicRadar.com.

With the results released on International Noise Awareness Day, MusicRadar.com teamed up with Metal Hammer, the U.K.'s best-selling heavy metal magazine, to create a countdown of the ultimate headbanging records. The online poll attracted over 6,000 votes from musicians and metal enthusiasts.

With a whopping 20% of total votes, "Master of Puppets" remains as popular today as when it was released in March 1986. Acclaimed by fans and critics alike, the album went multi-platinum, going on to sell over six million copies in the U.S. alone, despite receiving no radio airplay, with no single or music video to accompany it.

METALLICA's grip on the heavy metal scene is evident throughout the chart, with four of their albums appearing in the MusicRadar.com top 25. Today, the band continues to perform sold-out shows across the globe, with their music regularly appearing in best-selling videogames, including Guitar Hero and Rock Band.

The U.S. band beat legendary U.K. metal act IRON MAIDEN's 1982 album "The Number of the Beast" into second spot, with GUNS N' ROSES' "Appetite for Destruction" in third. Other acts in the top ten include Birmingham's BLACK SABBATH and AC/DC — who also soundtracked this week's blockbuster movie release, "Iron Man 2".

Mike Goldsmith, Editor-in-Chief of MusicRadar.com, said: "Whether it's AC/DC soundtracking 'Iron Man 2', RAGE AGAINST THE MACHINE getting the Christmas No. 1 or IRON MAIDEN winning a Brit, heavy metal is no longer an underground concern. Over 6,000 musicians and metalheads agree and have voted in what is MusicRadar.com's most popular poll yet. It's another award for METALLICA's thrash masterpiece and is the perfect soundtrack for International Noise Awareness Day. Turn it up!"

Alexander Milas, Editor of Metal Hammer, added, "This is a thrilling result — but it will come as no surprise to long time fans, as METALLICA's 'Master of Puppets' is an absolute landmark for our beloved genre. Ranging from the crushing and frenetic 'Battery' to the stately elegance of 'Orion', 'Master of Puppets' still explodes with the sweat-soaked denim of the band's more humble beginnings. Should the god-like IRON MAIDEN have won the poll? Are GUNS N' ROSES really heavy metal? Debates like these will rage forever on, and it's a testament to the intelligence and incredible passion of metalheads around the globe."

The full rundown of MusicRadar.com's best heavy metal album of all-time poll is available online at this location.