METALLICA will perform at the Iowa Speedway in Newton, Iowa on June 9 as part of the "WorldWired 2017" tour. Support at the show will come from AVENGED SEVENFOLD and VOLBEAT. Tickets go on sale April 21 at 10 a.m. via Ticketmaster.com.

The concert is a benefit for the Dallas Clark and Ashton Kutcher-founded Native Fund, a non-profit organization helping Iowans during disaster relief.

"'Newton, Iowa?' You ask... 'that's a new one!' We’re excited to announce that the 'WorldWired' tour will make a stop at the Iowa Speedway in Newton to play a special benefit show for the Native Fund on Friday, June 9," METALLICA wrote on its web site. "Our tour mates AVENGED SEVENFOLD and VOLBEAT will join us at the NASCAR track nestled between Cedar Rapids and Des Moines." 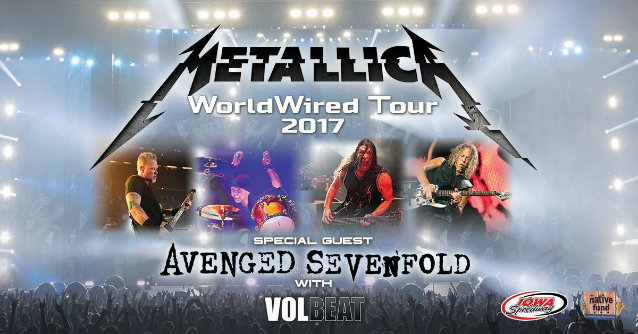