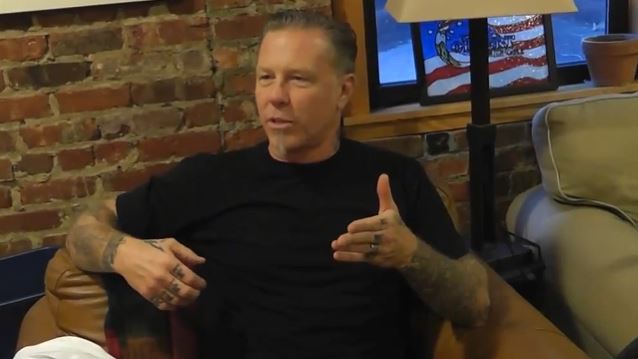 In the three-minute video below, METALLICA frontman James Hetfield talks about growing up with and overcoming his fear of responsibility and how that has played a part in his recovery from drug addiction. Hetfield also shares his views on what it means to be a role model and what he tells young people when they ask him for advice.

"I remember as a kid in school… There was a summer school for gifted kids… which, for me, was weird already. Gifted… yeah! [Laughs] And then going to summer school 'cause you're gifted. Wait a minute! You're gifted. You shouldn't have to go to summer school. But going to a summer school for gifted kids. Okay. It was around film. This was elementary school, by the way. And getting into film. It was, like, 'You're gonna make a film. Okay, get into groups and then come together with an idea and what you wanna do.' So I was, like, 'Oh, okay.' We get into groups together and then I was, 'Hey, how about we do this?' and [I had] all these ideas. And then they said, 'Okay now, choose your leader who's gonna be leading this group and who's responsible for the stuff.' And I shrunk, man. I got scared. And the rest of the group was, like, 'Well, you're the leader, 'cause you had all the ideas and all this.' And I was, like, 'No no no.' And I totally… I bailed on it. I bailed, 'cause I was afraid of responsibility — afraid of failure, maybe, afraid that I didn't know what I was really doing.

He continued: "And that's kind of what it's like for me in recovery at times — afraid to take on responsibility of sponees or something, or allowing myself to stand up and shine in that way."

The Hetfield video was produced by Road Recovery, an organization dedicated to helping young people battle addiction and other adversities, in partnership with Hooplaha.