METALLICA's JAMES HETFIELD On His Relationship With LARS ULRICH: 'We're A Good Team'

Hetfield talked about the interpersonal relationships between the METALLICA bandmembers which reached an all-time low in 2001 during the making of the "St. Anger" album. He described the dynamic between him and Ulrich as: "Lars is, 'I have to do everything, or else it's wrong.' He's got the weight of so much on him. And [METALLICA's new song] 'Atlas, Rise!' started out as a, 'Here, let me help you with that. You don't need to carry all that, brother.' And then it morphed into more — and this is not specifically him, but I'm plugging him into this — I think he likes that. There's a drama that makes him work, and we all have a bit of that. He wants the control but he doesn't really have control. The illusion of control, and then the ability to complain about how you have to do everything yourself, and then you still do it."

Hetfield continued: "There's some 'Psych 101'. But relationships, my God, every day I learn something, and relationships are teaching me about what's important. I went through a lot of stuff in 2001 [as captured in the 'Some Kind Of Monster' documentary], that was kind of my freak-out period, realizing my life is not working how it is now. And it took a huge bottom to realize that. And I think everyone in the band has hit their bottom in a certain way, a different way, over the past 10 years. There's been some realizations. It's just the age — between 45 and 55. Fifties. That's a number where you think, what the fuck am I doing? [Life's] more than half over! But the relationship with Lars, we've been friends for a long time, it's lasted longer than all the marriages in the band. God, we hate each other, and we love each other, and it morphs, it changes, but at the end of the day we realize, this works. And we're a good team, man. Trusting him: 'Yeah, I've got 800 riffs, and here they are. You edit them, you pick out the good stuff.'"

Hammett, for his part, admitted that he has had "a lot of therapy." Pressed about what he has had to see a therapist for, the guitarist said: "Dealing with my own interpretations of my own fucking brain. I need a lot of therapy. I'm broken. My theory is that Lars, James, Rob and I were broken very, very early in life, and that's why we became musicians, and the kind of musicians we are. A lot of anger and frustration, and needing a way to express and channel that. And I like to think that's why we found each other, that's why we were initially attracted, because we all had that in our personalities, and more importantly, when we pick up our instruments, the stuff that comes up is all congruent because we all come from the same sort of brokenness."

He continued: "I like using 'broken' as a term. It's James's term; if I had to use a different [one] I'd say we all came from really bad upbringings, we all had our challenges and had things happen to us that impacted us negatively in our life. But I also think that, fuck, man, that was done for a reason. It was done so we can do what we do and do it in a way that might help anyone else that's going through some fucking shit. I know to no small extent that we've all gone to music as a therapeutic device. I think that's why we're so wrapped up in all this. It's so intertwined in our make-up."

"Hardwired... To Self-Destruct" arrived in stores eight years after METALLICA's last full-length effort, "Death Magnetic". That marks the longest gap between studio albums in the band's 35-year history. The double CD/double vinyl LP features 12 songs and 80 minutes of music, while a bonus disc contains a song the band premiered last year called "The Lords Of Summer", several cover tunes and a live recording.

The deluxe edition bonus disc was initially supposed to contain demos of the original riffs that form the basis of the 12 new songs, but that idea was scrapped. Ulrich told The Pulse Of Radio how those riffs get shaped into new METALLICA tunes. "We have all these riffs and it's kind of puzzle-like," he said. "We just sort of go through, you know, that process and continue to revisit and 'Oh, wait a minute, that's really cool the way those two fit together but it doesn't really work with that other thing, so why don't we take those two and put them with that other thing, you know, Number Seven from over here' or whatever. So that's very much our process and we just sort of keep going through it until it sort of eventually turns into songs."

The band gave what was being billed as a "very special and intimate live performance" on Friday from London, which was livestreamed around the world. A North American tour is planned for 2017. 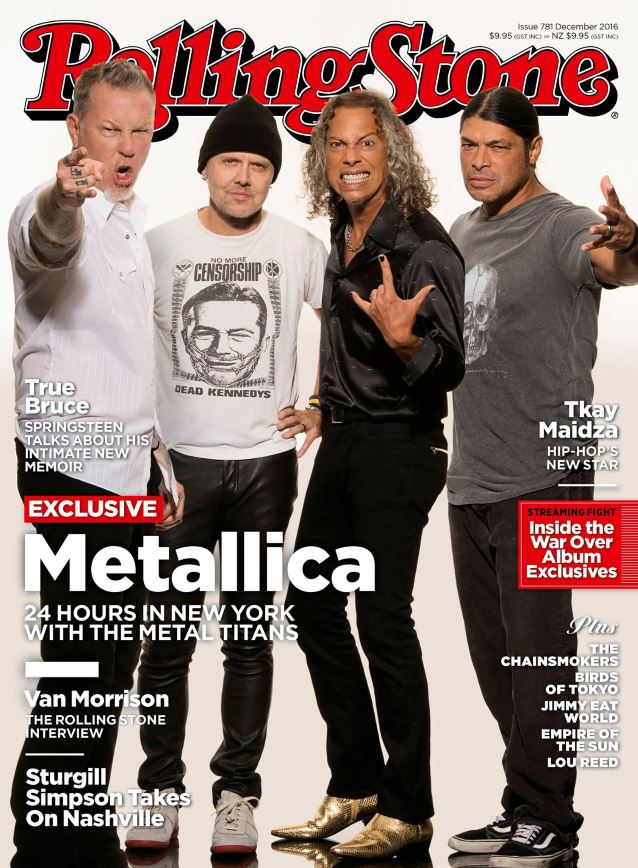