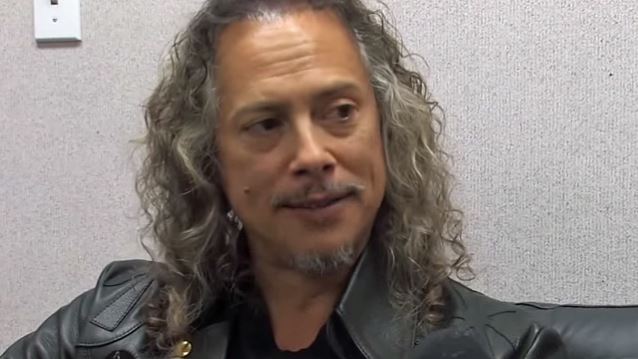 Back on May 9, Carlota of the KOMP 92.3 FM radio station conducted an interview with METALLICA guitarist Kirk Hammett at the Rock In Rio USA festival in Las Vegas, Nevada. Video footage of the chat, which has just been uploaded to YouTube, can be seen below.

Speaking about the progress of the songwriting sessions for METALLICA's long-awaited follow-up to 2008's "Death Magnetic", Hammett said: "We're just plowing away it and working on it every day, and we're gearing up to actually record some of it now. It's still so early in the process. You know, these songs we're recording, they might be on the album, they might not be on the album. It's just one of those things where we're just trying to, like, negotiate through all the material and just figure out what the best way to move forward is. And so, that's basically where we're at right now."

Hammett also talked about METALLICA's freedom to take its time making music and not being bound by any schedule. "Yeah, pretty much, no one else has any choice in the matter. A lot of it has to do with the fact that, you know, life takes over for us. We all have families, and we all have the band, and we all have other things in our lives, and it's just difficult scheduling all four of us in a room. And it's not because we don't wanna be together in a room — we want to be together in a room playing music — it's just there's other factors pulling at us. And we're doing our best. We're trying to work it all out so that we can have a schedule that allows all of us to be in the same place at the same time."

After Carlota recalled the first time she heard METALLICA's "Ride The Lightning" album more than thirty years ago, Hammett said: "When we started off, we didn't… none of us knew what would be in store for us; I mean, we were pretty much taking it day by day. And we were like a lot of young musicians back then; we would live moment to moment and a hand-to-mouth existence, because that's just how it is when you're a musician first starting out and trying to make a living through just playing music. But to be able to say we've been doing this for thirty years-plus is an amazing thing."

He continued: "I can remember the very first time I heard my most favorite band, UFO. I remember the first time I heard them. I was fifteen years old and I was sitting in the living room of my parents' house and my friend brought over this album and said, 'Hey, you've gotta listen to this album.' We put it on and it totally changed my whole perspective on playing guitar and what type of music I wanted to play. So I understand how powerful that can be, especially when it hits you with so much emotional impact, and then you look back at it and have a real clear picture of what you were doing, where you were, what you were feeling at that time. That's a very, very powerful thing, and yeah, I can remember times when that's happened to me too."

METALLICA currently has three dates on its calendar between now and mid-September: two shows in Quebec City, Canada and an appearance at the Rock In Rio festival.

Despite insisting that work has been proceeding on a new CD, METALLICA has spent a lot of time outside the studio in the last year, with activities that included a string of European all-request shows last summer and a week-long residency on "The Late Show With Craig Ferguson".