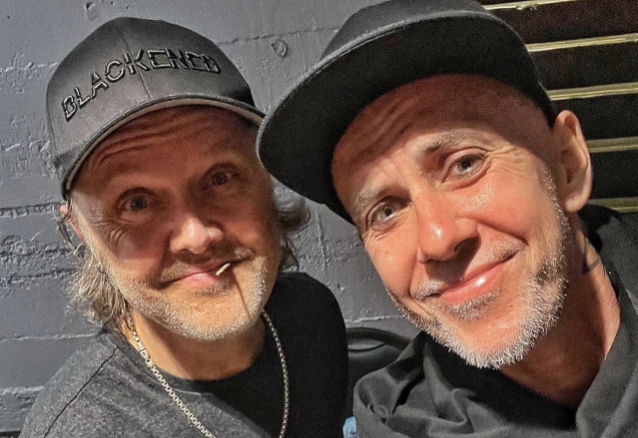 METALLICA drummer Lars Ulrich and his wife Jessica Miller attended ARCH ENEMY's May 13 concert with BEHEMOTH and NAPALM DEATH at The UC Theatre in Berkeley, California. The show took place just one day after the final date of METALLICA's six-concert South American tour, which ended on May 12 in Belo Horizonte, Brazil.

Miller, who is apparently friends with ARCH ENEMY singer Alissa White-Gluz due to their shared interest in animal rights causes, posted a backstage photo from the Berkeley show, and she wrote in an accompanying message: "Straight from Brazil —> Berkeley…jet lag could never hold us back from this hang! THANK YOU @archenemyofficial for the most mind blowing welcome home!"

BEHEMOTH frontman Adam "Nergal" Darski also shared a few backstage photos on Instagram, and he wrote: "Berkeley, Twas not only one of my top best shows on this tour but also a hang out of the year! @larsulrich thanx a lot for all the energy and meaningful conversations. Means world! Joe Huston @jaredmaceachern @robbflynn @chris.kontos it was pleasure hosting u brothers".

MACHINE HEAD frontman Robb Flynn, who was also in attendance, posted a picture of his own, and he captioned it: "Epic meeting of the heavy metal (and punk) minds last night. Lars, Michael Amott, Sharlee, Doyle, Chris Kontos. Talking All things metal and punk, debating JUDAS PRIEST and IRON MAIDEN, such a great hang after the BEHEMOTH ARCH ENEMY show".

In a 2017 interview with the BBC Radio 1's "Rock Show With Daniel P. Carter", Ulrich was asked if hosting his own radio show, "It's Electric!" on Apple Music's Beats 1, had changed his perspective on new music that is coming out. Lars said: "I can tell you what it has done — it has rejuvenated my connection to music and kind of re-inspired.

"There's actually a lot of great music out there. That's the good news. The bad news is that it's so difficult for the great music to stand out from the other music that's not so great because of the obvious demise of the music industry.

"I'll sit there and I'll find some band, and I'll love this song and I'll play it on the show, and occasionally I'll go on YouTube or something and that particular song's got 1,200 hits or something on YouTube, and you just sit there and go, 'That shoud have 1.2 million hits, not 1,200.' I mean, 1,200 hits — that's like the extended family of the bandmembers, you know what I mean? So there's a lot of great music that, unfortunately, doesn't really penetrate. So that's kind of the good and the bad of where this whole journey has gone. But there is a lot of great music. A lot of the stuff I play… a lot of great bands in England, lots of great music coming out from all corners of the world. So there is definitely lots of cool, inspiring stuff out there."