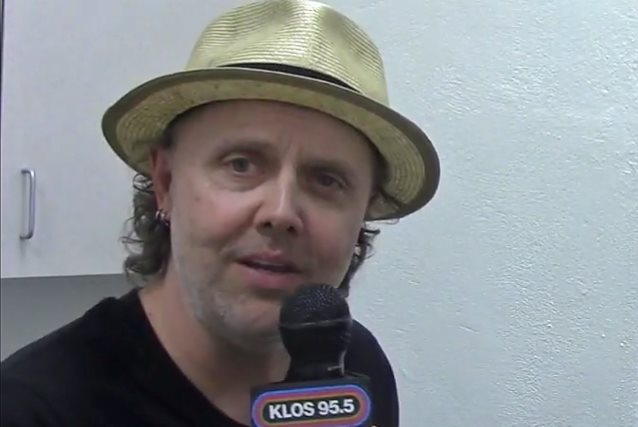 METALLICA drummer Lars Ulrich has paid tribute to Chester Bennington, saying that the LINKIN PARK frontman was a "kind," "unassuming" and "gentle soul, who had a really big heart."

Speaking to Marci Wiser of the 95.5 KLOS radio station before METALLICA's July 29 concert at the Rose Bowl in Pasadena, California, Ulrich stated about the LINKIN PARK singer (see video below): "Chester was a very kind and very unassuming and very gentle soul, who had a really big heart.

"The first time I heard LINKIN PARK, just singing those songs on this first album — when was it? '99 or 2000? — the power that came out of him was just unbelievable," he continued. "It was so original and so unique. He was one of those singers that has that rare gift where every word that comes out of him sounds authentic. He's not just writing something down that he sings… Everything that comes out of him sounds like he feels and he means every word, every nuance, every syllable."

Ulrich added: "We did a tour with 'em in 2003 where they were kind enough to come and play with us across America on a 'Summer Sanitarium' tour and we had a lot of fun. And all those guys are great guys and my heart goes out to all of 'em and to the family."

According to Ulrich, Bennington's tragic death once again brings attention to the fragility of life and how important it is to cherish every day and not take things for granted.

"I think more than anything, I think it reaffirms — without sounding too cheesy — that we've gotta live each moment to the max and just be in the moment," he said. "Every time we go out on stage, we try to take it all in. You never know when something can go sideways or something [can] happen to you physically or something. So life is beautiful and we've gotta just harness and maximize each moment to its fullest."

METALLICA frontman James Hetfield also paid tribute to Bennington, mentioning the LINKIN PARK singer by name during METALLICA's concert at the Rose Bowl. At the end of METALLICA's performance of the song "The Unforgiven", James said into the mic (see video below): "We forgive you, Chester."

Bennington was laid to rest in a private funeral Saturday (July 29) near his home in Palos Verdes.